From wet to white 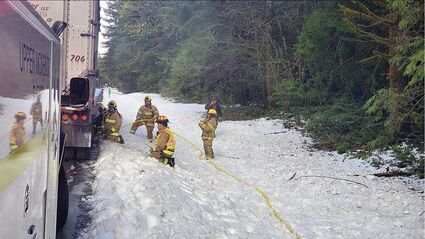 Upper McKenzie Fire District volunteers got some on the job experience during their weekly training session last Thursday. Just before the class began, they were dispatched to the scene of a semi truck on fire near the east end of McKenzie River Drive. The crew helped quell the smouldering vehicle after the driver had gotten it under control using packed snow.

MCKENZIE BRIDGE: Over two inches of rain was recorded at the weather station at Cougar Dam last week, and residents of the far eastern sections of the McKenzie Valley report they encountered measurable snow on a daily basis. Besides being unusual, those conditions were also challenging to some motorists.