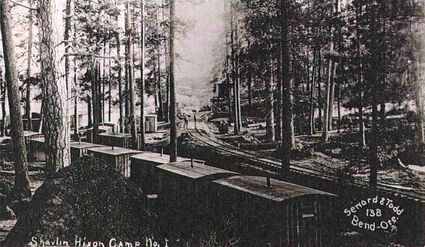 The first Shevlin-Hixon railroad-carried logging camp as it appeared in 1916. Note the bunkhouses are basically boxcars with a door and a window.

The U.S. Post Office inspector was puzzled. He'd just arrived at the tiny logging-company town of Shevlin, deep in the ponderosa pine woods south of Bend - and found it gone.

Shade trees still towered over manicured home sites. A stray whiff drifted in the wind from an open pit where an outhouse once had stood. And on the spot where he'd expected to find the Shevlin Post Office, there was nothing but the bare outline of a building.

The entire town of 600 was gone as if abducted by aliens.

But chances are good that the inspector knew exactly what had happened. Shevlin, you see, was a town built entirely with railroad rolling stock. It was, depending on how you looked at it, either a very small company town or a very large and elaborate logging camp. And the company that owned it did not practice sustainable forestry, so when all the trees were cutover, the town would simply move on.

The inspector headed back to headquarters, where he learned that Shevlin was now at a new location, 40 miles deeper into the pines, across the county line. A couple of weeks later, he got out to the new townsite and completed his inspection.

The town of Shevlin more or less came into being in 1932, and it lasted less than 20 years. It was named after the company that owned it - the Shevlin-Hixon Company of Bend.

Shevlin-Hixon was one of the most successful beneficiaries of the Oregon land-fraud scandals of the early 1900s, in which sharp operators like Stephen Puter hired hobos and laborers to pretend to homestead claims so that he could aggregate them into blocs of land large enough to interest timber producers. After years of investing in buying aggregated claims like these, along with railroad lands, by 1915 the company was the second-largest owner of Central Oregon ponderosa-pine timberlands - right behind Weyerhaeuser. It owned a vast tract of virgin ponderosa, some 215,000 acres.

Once its mill in Bend was complete, the company got busy turning those acres into dollars in what was then the usual manner. Crews of railroad builders ("steel gangs") graded and punched lines into the timberlands; spur lines were built; timber was felled, limbed, bucked and loaded onto rail cars and hauled out to the company sawmill in Bend.

Of course, to get all this work done, the company needed men. It needed swarms of men, and they needed to be close to where the work was being done. So, like most logging operations of the day, it threw together crude logging camps deep in the woods and stocked them with the gangs of young mostly-Scandinavian bachelors who worked the woods in those days. There was no store, no post office, no barbershop, no schoolhouse. The only family housing was for supervisors. In 1916, if you worked in the woods, you were either a bachelor or you left your family back in town for months at a time.

Now, even by the standards of a railroad-logging show, ponderosa cutting was fast - faster than Douglas fir or Sitka spruce. It didn't make much sense for the company to invest in building a camp of shacks only to abandon them a few months later.

So instead, the company built portable camps that could be moved out on railroad flatcars. When it was time for camp to move, the buildings would be hauled in, lifted off the flatcars with log loaders, and arranged along the spur line. When it was time to move on, it would be the work of a day or two to load the buildings back up and move them out.

The camp becomes a town

This system worked great for the company, as it progressively moved southward, getting farther and farther from civilization. But by the mid-1920s, society was changing fast. It was clear that to continue logging, the company was going to have to make its camps more family-friendly, or it would have trouble finding and keeping workers.

So in 1932, the Shevlin-Hixon Company decided to consolidate all its logging camps into one big one. They'd plat it with streets, blocks, and lots. They'd endow the camp with plenty of family housing, a store, a post office, a barbershop, and a school district. In other words, they'd turn it into a full-blown small town.

And thus, the town of Shevlin was born.

Residents of Shevlin tend to remember it fondly. Deep in the heart of Central Oregon, it was close to the kind of back-woods recreation that Oregon timber families have always loved: fishing, hunting, trekking, camping, swimming in cold alpine lakes, that kind of thing. There were no telephone bills or even rent payments to worry about. The isolation fostered a strong sense of community, and that sense extended to the owners and managers of the company - who, when the Great Depression gobsmacked the lumber market, helped the families get through by spreading the workaround so that everybody got enough to survive.

On the other hand, anybody who got fired was in a terrible pickle, which gave the company rather a strong hand in the event of any labor disagreements.

The houses were quite Spartan by modern standards. In the early years, they were basically boxcars with no wheels; but as the 1920s wore on and it became necessary to provide an environment that mothers would tolerate, the houses changed. By the 1930s they had gabled roofs, six windows, and specially designed front porches that folded up against the side of the house on moving days. They were 14 feet wide and 22 feet long, divided into two rooms, with the front entrance at one end, shotgun-house style.

Shevlin moved three times, each time going farther south, away from Bend. Company planners would scout a new location, roads and lots would be bulldozed, and latrine pits would be dug. Then, over a few days, the entire town - some 400 structures - would be hauled in and the homes set in place. Outhouses brought from the old townsite would be set down over the top of new latrine pits, and everybody would move right back in. It must have been a fairly disorienting experience for newcomers.

Moving day was a big deal. Most residents got to preview the new site and pick the lots their houses would be placed on. Then the front porches would be folded up, the windows covered and the houses prepped for the lift. Dressers would be laid flat on the floor, and towels wrapped around the dishes, but the company crane operators were pros - accidents were few. Postmistress Lois Maker Gumpert once left a bucket of water in the middle of the floor by accident, and when her house arrived at its new spot, not a drop had spilled.

Of course, the end came for Shevlin. It had to come. Right from the start, Shevlin-Hixon seemed completely uninterested in sustainable forestry. It was essentially a mining company, and once it had mined all the usable timber out of an area, it was done: no replanting, no thinning, none of that modern tree-farming stuff. Cut-over company lands were left to re-seed themselves, and the second growth, when it eventually came, was in the form of dense "dog-hair" thickets that had no commercial value.

In 1950, its endowment of ponderosa nearly depleted, the company sold out to Brooks-Scanlon, and Brooks-Scanlon was not interested in the company-town system of timber extraction. Before the end of that year, it sold off all the buildings, and the town was gone. 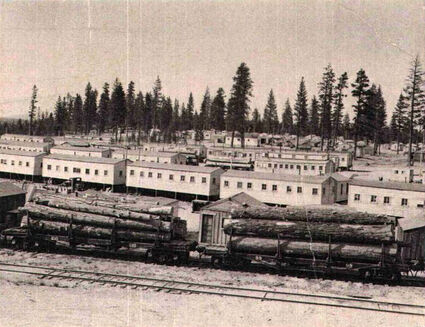 Shevlin as it appeared in 1947, when it was at the Chemult Camp location. The company buildings are in the foreground, with the family residences behind.

But it's a sure thing that somewhere around Central Oregon, there's a family or two still living in one of the old railroad houses that used to line its streets - wherever those happened to be.