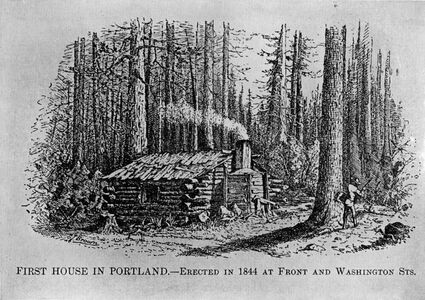 An engraving by Grafton T. Brown showed the first cabin in what would become the city of Portland – a cabin occupied by William Johnson, the Oregon Territory's original moonshiner.

Most people know Prohibition in the United States started in 1920 when the Volstead Act went into effect. But in Oregon, Prohibition started quite a bit earlier than that. Actually, it started before Oregon was even a state.

In 1844, the Oregon Territorial Government became the first in the United States to outlaw the use, manufacture or sale of booze.

The full story of Oregon Territory's first experiment with Prohibition will probably never be known; not a lot of written history has come down to us from early 1840s Oregon, and what we have is often contradictory. But from a distance, it looks an awful lot like the whole thing was inspired, if that's the right word, by the commercial activities of one man – a fellow named William Johnson – and his product, a rough-and-ready distilled beverage marketed under a picturesque and, sources agree, accurate name: "Blue Ruin."

The introduction of Johnson's Blue Ruin to the Willamette Valley frontier community was followed almost immediately by America's first prohibition law – the preamble to which gives a few hints as to why lawmakers felt it was necessary:

"WHEREAS the people of Oregon now occupy one of the most beautiful and interesting portions of the globe," they wrote turgidly, "and are placed in the most critical and responsible position ever filled by men, having as they do important duties to themselves, to their century, to posterity and to mankind, as the founders of a new government and a young nation; and WHEREAS the introduction, distillation, or sale of ardent spirits, under the circumstances in which we are placed, would bring withering ruin upon the prosperity and prospects of this interesting and rising community, by involving us in idle and dissolute habits, inviting hither swarms of the dissipated inhabitants of other countries, cluttering emigration, destroying the industry of the country, bringing upon us the swarms of savages now in our midst, interrupting the orderly and peaceable administration of justice, and in a word produing and perpetrating increasing and untowa4d miseries that no mind can rightly estimate; THEREFORE be it enacted by the Legislative Committee of Oregon as follows ...."

Fair enough. And yet the members of the Legislative Committee of Oregon were frontier men – they liked a little nip now and then. Why would they pass a law that most of them would subsequently be violating on a regular basis?

The answer lies coyly camouflaged among the references to "industry" and "prosperity." It's the part about "bringing upon us the swarms of savages now in our midst."

Which gets us right back to Mr. Johnson.

Mr. William Johnson, it seems, had settled in a little clearing by the river a dozen or so miles downstream from Willamette Falls in around 1842. Different sources give different accounts of Johnson: one says he was a deserter from a British man-of-war who'd settled there, hiding out from the Brits; others say he was a 50-year-old family man living in Champoeg in the late 1830s with a successful farm who, for some reason, abandoned his land claim and moved 50 miles down the river to stake out a new one. The explanation is probably that there were two William Johnsons in the valley at the time – Farmer Johnson and Bootlegger Johnson.

In any case, Bootlegger Johnson very quickly figured out that an ambitious distiller could sell every drop of liquor he squeezed out of whatever horrific precursor sugars could be had: table scraps, molasses, rotten tomatoes, floor sweepings from the nearest flour mill – whatever.

What came out of his still was like a raw, searing mixture of unaged grappa, white whiskey and Everclear. It's also a good bet that, being keen to save resources, Johnson didn't bother to discard the "heads" (the first ounce or two that comes out of the still with each batch, which contains all the toxic hangover-inducing wood alcohols and other nasty chemicals).

But it was cheap, there was plenty of it, and it was good enough for Johnson's primary customers: The Native Americans.

A taste for bad whiskey

Many of the leaders of Oregon's provisional government were former Hudson's Bay Company employees. They knew, from firsthand experience, that letting Native Americans buy as much whiskey as they wanted was a recipe for trouble. The Pacific Northwest natives had virtually no ability to resist liquor, and would drink just as much of it as they could get, as fast as they could. It would transform them from peaceful, happy people into raging, brawling rioters. The best-case scenario was a sharp drop in their production of otter pelts; the worst-case scenario was bloodshed and property destruction.

So the old Hudson's Bay men were careful to prevent whiskey from falling into Native American hands. Yet those Native American hands were unusually eager to get the stuff. The laws of supply and demand being what they are, the arrival of Johnson – or someone like him – was probably inevitable.

Once Johnson's commercial enterprises came to the attention of U.S. Indian Agent Elijah White, the official journeyed to Johnson's place and destroyed his still. And it was around that same time that the provisional government convened and outlawed his trade.

Johnson's reaction to this seems to have been to find a better hiding place for his rebuilt still. He may also have raised his prices. He certainly didn't quit making deliveries.

Any questions about whether "Blue Ruin" was a genuine public menace are answered rather nicely in the memoirs of one of Johnson's erstwhile partners – a rough-and-ready French-Canadian gambler and all-around rascal named Edouard Chambreau. Here's how Chambreau remembers his first liquor run with Johnson:

"The next morning the skiff was made ready with a 20 gallon keg of Blue Ruin. This was hid under the things in the bottom of the boat. ... There were quite a number of Indians camped here, and they were anxious to 'swap for lumm' (the word for whiskey)....

"We made them sit down in rows with their different things they had to put their Lumm in, and whatever they had to pay for it. They were all on the beach about ten steps from the skiff. ... We went to every one before we began to pour it out in their vessels, and agreed on what should be given for this and that measure full. Having done this, Johnson began to pour out and I carried the things to the boat. The principle things we got in exchange was Beaver and Otter skins, and Hudson's Bay blankets.

"An Indian, when he drinks whisky, he will drink as long as he can hold his breath. By the time [Johnson] was getting through with the last ones, the first ones were getting very funny. He shouted to me to run for the boat. I ran to the boat and shoved it until I was knee deep in the water. As he had the whisky, some of them followed him to the boat. He was retreating backwards with his keg under his arm and his long knife in the other (hand). In the meantime, I covered him with my rifle. Before it takes time to tell it, he threw the keg with what remained in it as far as he could toward the camp. This gave him a chance to get away from those who were immediately near him, and he got into the boat.

"We were almost in swimming water, with three Indians hanging yet to the boat. We knocked them over the head and shoved off just in the nick of time, because we had no more than had them loose from the boat than there was a gang of about 30 that came running and yelling with all their might. Then the fighting was among themselves.

"On this trip we made very near $500 apiece," Chambreau concludes. "The reader can draw his own conclusions of what must have been the scene in that Indian camp with 20 gallons of that abominable stuff in them."

William Johnson died the following year. I haven't been able to find a source that will give a cause of death, but a couple of them hint that it happened during one of these deliveries ... a fate that seems grimly appropriate, maybe even just.

In any case, Oregon's prohibition law was repealed the year after Johnson died, and after that the booze flowed pretty freely, right up until the 1910s.

The still Johnson was running when Chambreau helped him make that 1847 delivery was tucked away in a gulley about four miles south of Oregon City, a setting much more in keeping with the spirit of an illicit moonshine still. But it's worth noting the location of the first one he set up – the one White destroyed when he learned the Native Americans were getting supplied by it. Most likely it was conveniently located by his cabin – in the area of what's now Macadam Avenue near the Ross Island Bridge, right in the middle of Portland. Johnson's was the first house in Portland ... and, it seems, the first business.