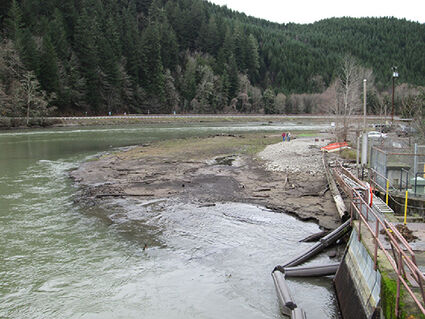 A preview of a dewatered Leaburg Lake occurred in 2014 when crews needed more access to repair storm damage.

EUGENE: During their May 3rd session the Eugene Water & Electric Board's commissioners gave good reviews for last month's meeting in Leaburg when options for the Leaburg Canal were discussed.

Agreeing with that assessment was Will Rutherford who also asked for some more details. "People need to know what percentage of electricity is generated by Leaburg and what that means in terms of dollars and income to EWEB because we think the impact is really greater than it is," the Lure Lane resident said.

Ward 3 & 4 commissioner John Barofsky said he felt information about returning the canal to its natural state, "was the one that caused the most concern among the people," and for himself as well. Discussions at prior board meetings, he said, had outlined three scenarios - stormwater conveyance, a return to generating electricity, or a hybrid of both. Describing in detail what would have to happen if the canal was removed "was almost new to me," the commissioner said.

"I think it touched a lot of nerves up there that may not needed to have been touched that bad," Barofsky added. "In my mind (canal removal), that's a pretty extreme lift."

Matt McRae, who represents Wards 1 & 8, said he'd favor another upriver meeting to, "help us all understand what the tradeoffs look like."

Returning water to the way it naturally flowed could be seen as a heavy lift, he felt, but might not be as expensive as limiting the canal to only carrying off stormwater.

EWEB's at large commissioner, Mindy Schlossberg, said she's been planning to hold some "town hall" type upriver meetings and would work with general manager Frank Lawson to schedule one in June.