A swindler's-eye view of frontier Oregon 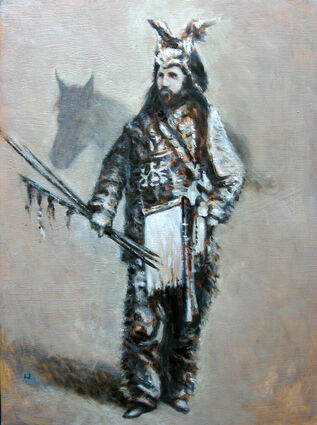 A portrait of Edouard Chambreau as a young man, based on a very early photograph that appears in Wehrkamp's dissertation.

In its early years, Oregon was at the outer limits of the known world, and that remoteness attracted all sorts of interesting characters. There were Joe Meek types, driven by a spirit of adventure; there were guys like William Ladd, who came hoping to get in on the ground floor and become the next generation of business barons; and, of course, there were the Marcus Whitmans and Jason Lees, the state's spiritual forefathers, come into the wilderness to save souls.

But there was another kind of frontier Oregon character, too, to whom the remoteness of Oregon appealed: The criminal, looking to run away to a place where people's memories are short and laws are new and weak.

History has recorded plenty about the successful, hardworking folks who would, a few decades later, become Oregon's gentry. But history was mostly written by members of that gentry, people who wanted to cast Oregon in a positive, glorious light. The last thing they wanted to write about was what was going on in seedy saloons in places like Portland's North End "Whitechapel" district, or the brothels and "cribs" of the Second Street "Court of Death."

Which is why the writings and recollections of Edouard Chambreau are so valuable. Chambreau, in middle age, wrote a long and heartfelt memoir as a sort of confessional – hoping by his example to turn future young men away from the path he had trodden for the previous 40 years. In his youth, he had been an itinerant swindler, gambler, gunfighter and liquor peddler, one of the most scurrilous rascals in all the Oregon territory.

It was, one has to admit, an interesting story. And it sheds much light on the seedy underbelly of the frontier communities of the Oregon Country.

Not cut out to be a tailor

He spent the following decade or so in circuses and blackface-minstrel troupes, and it was there that he learned the skills that he'd bring to bear so effectively on the Oregon frontier: fighting to win, cheating at cards and dice, and making money the old fashioned way – by swindling people.

He spent a little time in the Army of the West, fighting in the Mexican-American War, and it's that enterprise that brought him to Oregon for the first time, in 1847.

The Oregon Territory would never be the same.

Almost immediately upon arriving, Chambreau connected with William Johnson, the Oregon country's first bootlegger, who was secretly distilling a nasty substance called Blue Ruin out of flour-mill leftovers and selling it to the local Native Americans. (Oregon was under Prohibition at that time – Johnson's Blue Ruin enterprise had inspired the first Prohibition law in American history. It wouldn't be repealed until 1849.)

Chambreau in the gold fields

The next year, Chambreau was in a Hudson's Bay Company prison in Fort Vancouver when he got word of the discovery of gold in California, and he immediately knew he had to go. With the help of some friends, he broke out and fled southward to the gold fields.

But not to look for gold – at least, not directly. Although he got in very nearly on the ground floor in the gold fields, it seems never to have occurred to him to try his luck as a miner. No, Chambreau's plan was to let the miners get the gold, and then swindle them out of it at rigged games of chance.

Hounded out of San Francisco

In San Francisco, Chambreau settled in with a pack of his friends from the Army of the West – including James Lappeus, who would become the first Portland Chief of Police twenty years later. The group of them formed themselves into a gang, dubbed themselves "The Hounds," and got busy terrorizing the frontier citizens of the future City by the Bay, running a sort of protection racket there.

Then one night, Chambreau and fellow Hound Jim Beatty got into a shootout with a group of Mexican miners. When the smoke had cleared, Beatty was dead, and the Hounds decided some retribution was in order.

So a few nights later, their faces masked or blacked out with burned cork, the Hounds descended on the Mexican and Chilean mining camps for an out-and-out massacre. Miners were shot as they stumbled out of their tents, and then the tents were torn down and set afire. Chambreau does not say whether he participated in this atrocity, but he almost certainly did, since he was with Beatty when he was killed.

For a frontier town that had been suffering less egregious thuggishness from the Hounds for some time, this act of mass murder was too much.

The next day, "San Francisco had put on a different look," Chambreau wrote. "People could be seen in different places whispering together, and sizing up all those who were suspicioned of having taken part in the massacre."

And the day after that, with stunning speed, Sam Brannan's vigilance committee formed, about 400 strong and armed to the teeth, and fanned out over the city looking for Hounds. Their official goal was to arrest the Hounds, not to lynch them, but every Hound knew mob action was a real possibility.

Trouble on the run

Chambreau got out, but only just barely. He disguised himself as a hobo and stowed away on a schooner, whose first mate he bribed to help him get out.

The schooner took him to Stockton, where he again very nearly got lynched after being caught harboring a robbery suspect.

After that, he quickly headed into the gold fields, where law enforcement was sketchier and less organized and where gold by the ton was being hauled out of the ground by suckers, ripe for the plucking. Dressed like a miner to allay suspicion, the sharp-dealing gambler drifted from town to town, fleecing the real miners and then shooting, punching or knifing his way out of any trouble that resulted.

Around 1850 Chambreau dropped in to visit old friend Lappeus, who'd also made it out of San Francisco somehow. Lappeus was running a saloon-general store called Ten Mile House, just north of Sacramento. Chambreau arrived just in time to help Lappeus deal with a large, angry cohort of drunken teamsters. He doesn't say, but the most likely explanation for this is that the teamsters had caught Lappeus cheating them; he and Chambreau were both masters of the art of swindling people at the card table or faro bank.

The two ex-Hounds drove the teamsters out of the building by throwing whiskey bottles at them.

"Some of them, after they got outside, they began to shoot," Chambreau writes. "In an instant we both had our six-shooters out, and you think it was not lively there for a little while? After we had driven them away from near the store, we retreated and barricaded ourselves inside and made ready for an attack, but they did not want any more of it. We were both hurt but nothing serious."

After this, Chambreau teamed up with another gambler and headed out to the mining towns again – "We had something new on the game of Monte, and before it would be exposed, we thought we would take a trip in the small mining towns," he wrote – and had a few more experiences of shooting and pistol-whipping his way out of lynch mobs before finally giving up and heading back toward Oregon.

By 1853, Chambreau was back in Portland, and had opened a saloon near the corner of Front and Morrison streets, right by the river. He was also courting a local woman, a respectable girl who was understandably terrified by his sinister reputation, but who also seemed to see something in him. She would be the cause of the big change in his life – but that change wouldn't happen for a full twenty years, and those would be eventful years indeed.

We'll talk about those 20 years in next week's column.