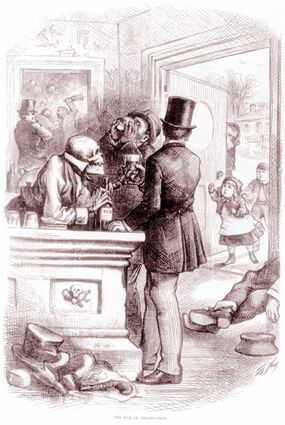 A cartoon by Thomas Nast from Harper's Weekly was published in March of 1874 at the height of the anti-saloon temperance movement.

In 1853, a French-Canadian gambler, fighter, and all-around rascal by the name of Edouard Chambreau arrived in the brand-new town of Portland, ready to go into business.

Chambreau had just come from the gold fields in northern California and southern Oregon, where he'd been wandering from town to town, fleecing miners and other gamblers and running from the occasional angry mob.

But the previous year, he had met a woman – a nice, respectable girl by the name of Barbara Ann McBee. Despite his fearsome reputation, Barbara had seen something in him, and when he popped the question, she said yes – so now he had a young wife, and possibly a family on the way. It was hard to imagine life as a roving hard-punching gambler, drifting from mining camp to mining camp with one hand on your poke and the other on your pistol, with a wife and baby in tow. It was time to settle down ... or at least, try to.

So Chambreau set up shop by the St. Charles Hotel on Front and Morrison and hung out his shingle. He was now a saloonkeeper – not exactly the height of respectability, but a great improvement on his previous profession of an itinerant gold-country scallywag.

But a few months later, Chambreau got in a fight with a hotel owner and was more or less forced to leave town. He traveled to Vancouver, signed on with Ulysses S. Grant, and traveled up the Columbia River Gorge with the United States Army.

Chambreau's career in uniform was relatively successful, although it got off to rather a rocky start. A few months into it, he found out that the soldiers he was serving with wouldn't be paid for their service until they got back to Vancouver. That meant they were all flat broke, and he wouldn't be able to swindle them out of any of their pay along the way – as he had anticipated being able to do. This almost prompted him to desert.

Back at home, Barbara Ann tried her best. She prevailed upon Chambreau to become a farmer, but this lasted only a little while. He continued to serve in the Army (where his command of Native dialects and his French heritage made him particularly useful) and eventually opened yet another saloon and gambling den. Chambreau's time in Vancouver was wild and unruly, peppered with card games, drinking bouts and even an occasional gunfight. He also had a bit of an itchy foot, as they say.

"I had a good and loving wife, and she did what she could to keep me home, but it was of no use," he later wrote. "After I would be home a while, I would get a kind of a fever, and off I would go again."

It was a bit like an early version of a Jerry Jeff Walker song – she'd lose him to "that rodeo wind," as it were. And it happened again and again.

Eventually, again, the town got too hot for him, and the Chambreau family – including, now, several children – moved to the Tygh Valley, near The Dalles, where Chambreau opened a trading post.

It was in the Tygh Valley that Chambreau's wild and rascally ways first seriously started to mellow. His trading post was an enormous success. His relations with the Native Americans – characterized by a then-rare degree of respect – gave him a big advantage over any competitors. He quickly earned the respect and (mostly) admiration of the entire tiny Tygh Valley community, of both races

Liquor was a part of his business in Tygh Valley, to Barbara's dismay – but only a part. Mostly, Chambreau was a storekeeper. A few years later, he was elected Justice of the Peace. It looked as though Barbara Ann's prayers were finally being answered.

Then word drifted back that someone had struck gold in the Boise basin, and that rodeo wind started blowing again. Soon, Chambreau was off, leaving business and family behind.

"My excuse was to go and make money, but really it was the excitement that I wanted," Chambreau wrote. "I have regretted this trip all my life."

Back to the gold fields

He soon was running a gold-field gambling house amid a veritable swarm of frontier gold-country hooligans, all of them busy drinking and shooting and swindling each other as the real miners tried to hang onto their wallets and stay out of the way.

"It was almost the days of '49' all over again," Chambreau wrote.

For almost two full years Chambreau thrived in this petri dish of iniquity, giving as good as he got.

Then one day he had a terrible dream – a dream of his six-year-old daughter's death. It brought him back home to the Tygh Valley on the gallop, and on his arrival, he found it to be true.

Moreover, while he'd been gone, the trading post had gone to ruin; the people hired to run it had stolen stock; and the facilities had deteriorated. Chambreau had taken a thousand-dollar bath in the "fire sale" of his saloon in the gold country, and couldn't afford to set it all straight. So he moved into The Dalles ... and opened another saloon and gambling house. He ran this for two more years, then moved back to Portland.

In Portland, Chambreau, although almost flat broke, gathered together a small stake and went into the restaurant business. But if he was hoping that selling meals would be a quieter way to make a living than selling booze, he was disappointed.

"Here in this business I had as much trouble and as much fighting as I had in the saloon," he said. "Every old bum would come in, set down, eat all he could, and when he was through, he would say that he had no money to pay for it."

This cost Chambreau a lot of money – but not for the reason you might expect. It wasn't the cost of the food; it was the legal costs associated with thrashing the deadbeats, something it doesn't seem to have occurred to him to stop doing.

"I had already paid three fines for 'firing' men out because they would not pay for what they eat, until one day a tight one by the name of Buckskin Bill came in, called for a good meal, and when he got done eating, he said he would pay me another time," Chambreau wrote. "Well, I used this man up so bad he had to be taken off the sidewalk in a cart. The fine was $90."

Perhaps this was because the restaurant was in such a bad part of town. It was right next to a "free and easy dance house" and gambling hall in the North End.

Eventually, Chambreau gave up on the restaurant and went into partnership with the owners of the dance house.

Chambreau's autobiography is a little bit cagey and oblique in describing this gambling-dancing joint, which suggests it was probably more than just a gambling house.

"This was one of those places where 'everything went,'" he wrote. "This place was open for everything that talked, from the highest to the lowest of both sexes. Any one could be accommodated with fun, amusements, and games of all kinds with cards or other devices."

It's hard to say for sure if Chambreau meant this to imply that his new saloon was also a bordello. Other than Chambreau's memoirs, documentation of this "hell-hole," as he took to calling it, is very scant. But the way he writes about it, and about his new partners – a man he identifies as "Sam R." and a woman whom he never names at all – suggests this might be the case.

In any case, Chambreau makes it quite clear that there were "girls" working there, and that their job was to fleece the suckers in some way – if not in bed, then certainly at the card tables or on the stage.

Chambreau wasn't long-running this particular joint. Most likely, Barbara Ann put some pressure on him to get out of the "girls" business. He spent a little time as a freelance gambler, opened a sort of liquor-and-pawn shop, lost it in the great Portland fire of 1873, opened another one, lost it in another fire, and finally settled down in an upscale saloon on the corner of First and Washington, in the respectable end of town.

He was operating this establishment in March of 1874 when a group of ladies in their Sunday best stepped into his saloon. This was unusual. In 1874, women might be seen in a saloon if they worked there, but ladies? Never. 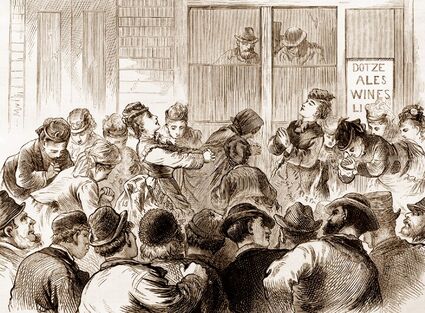 A cartoon drawn by John Chapin from Leslie's Illustrated Newspaper in February 1878, showed a group of temperance workers holding a prayer service outside a saloon, whose proprietor apparently had refused to let them in.

But these ladies wanted to know if it would be OK for them to hold a prayer-and-hymn-singing service there, while he was serving his customers.

But they kept coming. And finally, one day, he let them in.

The crusaders finished up their services, handed out fistfuls of temperance tracts, and left. When the saloon closed that night, Chambreau was left with a pile of them, thinking about things.

The next night, Chambreau handed over the keys to his partner and quit the liquor-and-gambling business for good.