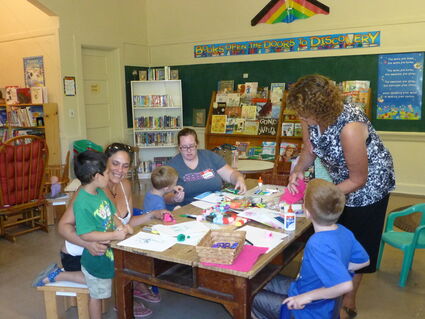 The library's books, magazines, videos, and audiobooks are only part of what brings smiles to many of the area's children.

LEABURG: People might feel what it's like to almost fall in love in Paris, nearly tumble to their death in Berlin, or barely escape from a Sahara sandstorm. Others could gain insights into how civilization was carved into the surface of America's western frontier. Experiences like those can come to mind by picking up the "The Brief and Wondrous Life of Oscar Wao" by Junot Diaz or "Angle of Repose" by Wallace Stegner. Both books are among a multitude of Pulitzer prize winners on the shelves of the Leaburg Library.

For 37 years, the all-volunteer free library has been stocked with 20,000 volumes, on donated bookshelves. There are seventeen regular volunteers who pitch in, as well as a director, a children's librarian, and a six-member library board. The result is a year-round offering of programs for adults and children, as well as special events and activities that are all free of charge.

Those efforts are appreciated, according to patrons like Anne Bacon, who says, "I never leave the library without three or four books from my Pulitzer list. I have three more books waiting on my bookshelf now, waiting to read. What a terrific resource and it's free."

Nearly all of the books inside the 1923 vintage former Leaburg School building have been donated. Besides printed works people also have access to two computers (with high-speed Internet access), Wi-Fi, and a copier, all provided through the generosity of some of the library's supporters.

Besides shelves of books, the building includes space for group meetings, like the Leaburg Bookworms Book Club which meets monthly; a once-a-week meditation group; Girl Scouts sessions during the school year; and rookie training sessions for McKenzie Fire & Rescue firefighters.

It's also a place of inspiration. Last year children participating in the library's summer reading program read a different book every week and took on a project that reflected the theme of a book.

The "I Can Make A Difference" project focused on how each child could make a difference at home, and in his/her community.

"The Mess We Made," by Michelle Lord, which illustrated how earthlings have successfully polluted our world generated a nearly overwhelming real-world response.

To go along with the theme of this book, "We asked the kids to help their community by collecting as many bottles and cans as they could, and bringing them to the library that Saturday to give to the Bottle Boys in Blue River for their recovery effort," explains Library Director Marty Mealey.

"We thought that if we got a few sacks full, it would be terrific," she recalls.

The response was more than that. "As I reached the top of the stairs in the library and headed down the hallway, I could not believe what I saw. The hallway was nearly blocked by the pile of stuffed-to-overflowing garbage bags. Not little sacks, mind you - big garbage bags!" There were sixteen bags altogether. 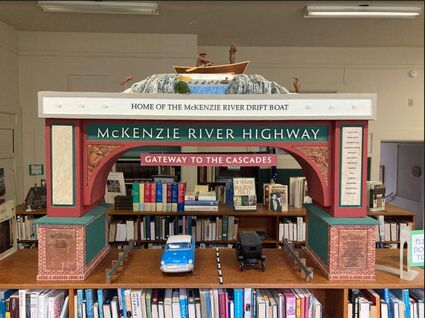 A scale model of the proposed Springfield/McKenzie Gateway Arch, which has found a home in the Leaburg Library, is one of the facility's thought-provoking added attractions.

Over the years, the library has expanded from one to six rooms: the Main Room which houses fiction, audiobooks, and DVDs; the Annex where non-fiction, reference materials, magazines, and displays are located; the bright and colorful Children's Room which has books, magazines, videos, and audiobooks for children and young adults; and the Kitchen which houses a marvelous collection of books on wines of the world, and an equally fascinating collection of mostly French Cook Books. There's also the History Room where people can find antique books, artifacts, and historical accounts of the McKenzie River Valley; and Angler's Roost which houses a unique collection of rare and collectible books on flyfishing - arguably the best collection of its kind in the area.

And, as Anne Bacon notes, "I am so thankful for our local volunteers and this is just another of the many reasons I love living in this area."