From stage stop to center stage 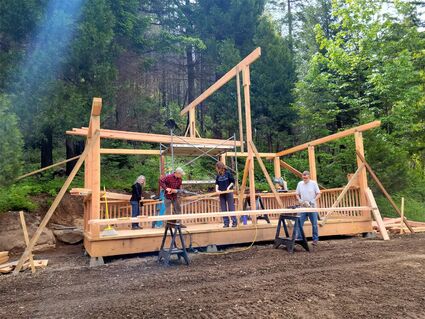 Leian DeLeon (left), Chris DeLeon, Jesslin DeLeon, and Paul Dage have all been busy lately constructing a new performance stage at the Gate Creek Ranch (red barn) in Vida. The first show on the new stage is slated for June 26th and will be open to the public.

VIDA: What was once a turn-of-the-20th-century stagecoach stop will now be a place to stop again – for live musical performances.

Chris and Leian DeLeon, owners of Gate Creek Ranch in Vida, and their daughter Jesslin DeLeon are building a large wooden stage on their property (known for its big red barn) which also houses their businesses - Blue Sky Trees, Inc. and a social event venue.

"We've always thought it would be great to have live music here," says Chris DeLeon, who is milling lumber for the stage from logs salvaged from the Holiday Farm Fire. After Chris cuts boards on his portable sawmill, Paul Dage and Ray Blair - two of the concert organizers - measure, cut, and hammer them into place.

The first concert will be a fundraiser for the Vida Community Center, which was destroyed in the fire. It's scheduled for Sunday, June 26th, from 1 to 5 p.m. Taking center stage will be three bands. Two hail from Douglas County: Melissa Ruth and the Likely Stories will be performing doo-wop twang and Neil Gregory Johnson's program is filled out with country blues. From Eugene, Sugar Pine will round out the show with progressive bluegrass tunes. Organizers say the event was planned to be family-friendly.

The idea for the concert was born when a group of friends, including Dage, Blair, Edie Blair, and McKenzie River Chamber of Commerce president Nadine Scott, were brainstorming ways to bring valley residents together, as well as attract tourists. Caddisfly Concerts was the result, and planning began for its maiden show.

"We hope Caddisfly Concerts will blossom into an ongoing series, and bring neighbors and visitors together to enjoy the best in local and regional music," says Dage.

The Chamber of Commerce and the McKenzie Community Development Corp. are sponsors of the event. Food and beverage from local vendors will be available for sale.

More information about the concert and tickets is available at CaddisflyConcerts.com.