Wildfire alert camera is first in the area

Digital lookout can see up to 120 miles 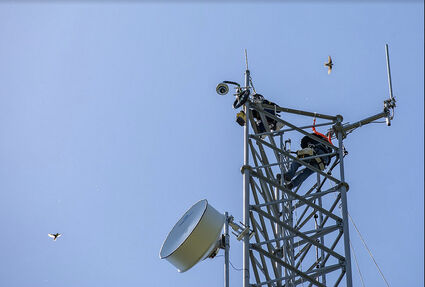 Climbers from the Elevate Technology Group were checked out by birds Monday as the installed a camera atop a 190 ft. tower on Smith Ridge. In addition to installing the 75-pound camera for free, Elevate is also providing a backup internet connection on the tower.

MCKENZIE BRIDGE: On Monday, workers put a hardhats, strapped into safety equipment and ascended 190 feet up a metal-framed communications tower that juts up from one of the highest ridges in the McKenzie River Valley. At the top, they installed a basketball-sized camera with a lens that has a 360-degree view of the surrounding mountains and can see 40 miles during the day and up to 120 miles at night.

The new digital fire lookout, with a live feed viewable on the Internet, will be used to spot fires when they're small - and before they threaten nearby communities in the McKenzie River Valley.

The equipment will be part of ALERTWildfire system, a consortium of three universities, including the University of Oregon's Hazards Lab. Though the ALERTWildfire system now has more than 700 cameras across six states, this is the first that will cover the McKenzie area.

The camera was installed on an EWEB tower that provides radio communications for the utility's Carmen-Smith hydroelectric project.

"Early detection, especially in remote areas with steep terrain, is important for both emergency responders and the public, so they have time to make plans to stay out of harm's way," said Jeannine Parisi, EWEB's resiliency manager.

"That's why we're working with the University of Oregon to provide the kind of long-distance visibility that any community member can access and quickly report if they see a wildfire," she added.

Other elements of EWEB's wildfire mitigation plan include inspecting power poles and pruning vegetation along 250 miles of power lines every year. EWEB is hardening infrastructure by replacing some wood poles with iron ones, changing the fluid in transformers to a less flammable material and consolidating the wires on poles to reduce the risk of sparking. In the coming years, EWEB will continue to enhance designs and construction techniques through a lens of wildfire mitigation to limit the risk of a fire igniting or damaging systems.

With high-quality information about the size and severity of wildfires, it's expected emergency responders can better marshal resources to contain wildfires or evacuate at-risk areas. 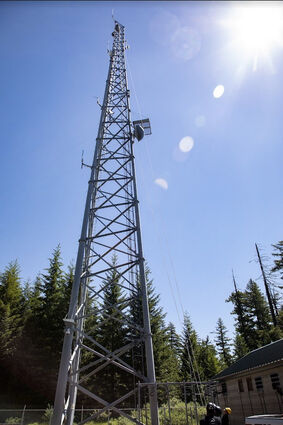 "There used to be hundreds of fire lookout towers staffed by people across the American West, watching for fires. We don't have that anymore, but what we do have now is a growing network of digital lookouts in these wildfire cameras," according to Douglas Toomey, a professor of earth sciences at the UO, and the director of the Oregon Hazards Lab, which is partnering on the project. "Preventing the most destructive wildfires requires spotting them before they morph into bigger blazes – even if those fires start in a remote location."

The camera's housing contains a heater and fan to remove fog and ice. It will also have near-infrared viewing abilities so it can detect light coming from a wildfire during darkness.

The live camera feed will begin in a few days and will provide a live feed viewable by anyone at http://www.alertwildfire.org.

EWEB's board reviewed the Wildfire Mitigation Plan in June and a vote is scheduled for July.