It wasn't easy being German during First World War 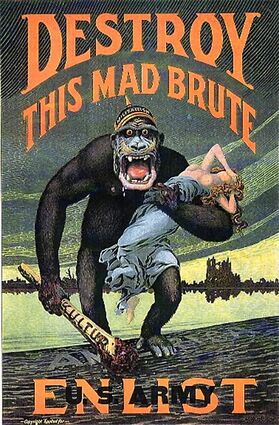 An example of the anti-German war propaganda posters depicting Germans as bloodthirsty "Huns" in order to whip up popular support of American participation in the First World War.

Nobody remembers it today, because it was so long ago. But the outbreak of the First World War changed Oregon – and the rest of the United States – a great deal.

News of America's entry into the fight was greeted with excitement, eagerness and dread. But there was one particular group of Oregonians for whom the dread was particularly pronounced: The German-American community.

The German-born cohort of Oregon residents was bigger than any other foreign-born group, totaling 18,000 in the 1910 census, with another 22,000 children of German-born parents – roughly 6 percent of the state's total population. Before the war broke out, they had been considered among the most desirable immigrants by the lights of the day – Northern European, mostly Protestant, hard-working, clean-living, solid.

J. Henry Albers, one of Portland's most prominent citizens and the president of the Albers Brothers grain-milling company, found out the hard way how much things had changed, shortly after the U.S. entered the war. On his way home from a business trip to San Francisco, he had a few too many drinks and started singing – in German.

Upon arrival in Portland, Albers was arrested and charged with "Seditious Conduct by a German Alien." He was convicted and sentenced to three years in prison – for singing!

Over the following four years, Albers appealed his conviction all the way to the Supreme Court. The federal government fought him every step of the way, even years after the war had ended, only to drop its case on the day the Supreme Court was to hear it in 1921 – claiming that it had made a technical error. (It's hard to read that in any way other than as a malicious move to make sure Albers didn't get a chance to be vindicated.)

For Albers, the shame of it all was devastating. The final blow came when he was expelled from his Elks Lodge, and 10 days later he suffered a stroke and died.

Most of the German-born Oregonians didn't suffer as dramatically as Albers did, of course. But many of them did have their lives turned upside down. President Woodrow Wilson had issued an executive order barring them from coming within 100 yards of the waterfront or a half-mile of the armory, which was a huge problem for non-naturalized Germans who worked as longshoremen (or even as owners of saloons on Front Street). This obstacle could sometimes be overcome, but not always, and it involved lots of red tape and hassle – hearings, paperwork, permits and so on.

A far more disturbing problem, though, involved the American women who'd married one of those German citizens.

Back in 1907, while the battle for women's suffrage was heating up, a little-noticed law had been passed stipulating that women who marry foreigners be stripped of their citizenship. The idea, following the now-thoroughly-discredited eugenic theories of the day, was to discourage American women from participating in "race suicide" by marrying men from "inferior races" and to encourage them to leave the country if they did. Stripped of her citizenship at the altar, a now-stateless bride on her wedding day was expected to acquire citizenship in whatever country her husband hailed from, and she was not eligible for the naturalization process to become an American again.

That meant that a native-born Oregon woman who had fallen in love with and married one of the thousands of non-naturalized foreign citizens in Oregon – be he British, Irish, Italian, Japanese or German – was now officially an alien, with no rights to vote or hold elective office.

And after the U.S. entered the European war, those girls who'd married a German were ordered to report to their local police station and register themselves as "enemy aliens."

Hattie Burbank was one such "enemy alien." Born and raised in Sherwood, she was a second-generation Oregonian in love with a German-born logger named Adolph Dahrens. Adolph had, in 1916, started the process of applying for naturalization, and in June 1917 – two months after America entered the war – he registered for the draft, offering his services to the American army for purposes of fighting against his fellow Germans.

Hattie's parents strongly objected to her marriage – probably as a result of the anti-German sentiment with which the non-German citizens of Oregon were then saturated. What their motivations might have been, we can't know, but two weeks after the marriage they reported her to authorities as an enemy alien.

Hattie at first refused to register. Her position – not an unreasonable one – was that as a native-born American who had never been to Germany and didn't speak German, she was not an enemy alien, no matter what President Wilson's opinion was.

Finally, offered the choice of registering as an enemy alien or going to prison, Hattie relented and submitted to the indignity of having the postmaster of Sandy describe her nose as "large and fleshy" on her registration paperwork.

And then there was Grace Reimers, who really was in a pickle. She'd married German citizen Paul Reimers a year or two before Germany went to war in 1914. Early in August of 1914, Paul left Portland to join the German army, leaving Grace and the baby to fend for themselves. In 1918, when she found out she'd have to register as an "enemy alien," she promptly filed for divorce.

Luckily, courts and authorities were sympathetic to her story; after all, it played perfectly into the narrative of the cruel "hun," abandoning his wife and baby in his zeal to crush democracy. After the divorce was granted, she was quietly restored to citizenship.

Once the war was over, and America started its quest to get "back to normal," things quickly got better for most German-American Oregonians – particularly after the realization started to dawn on their neighbors that they had been snookered by a carefully crafted anti-German propaganda machine designed to manipulate them into supporting Wilson's war.

But although they were no longer "enemy aliens," women who had married foreign men remained stateless and legally dependent on their husbands' citizenship for years after the war ended. The Cable Act of 1922 restored the citizenship of most, but women who'd married Chinese or Japanese men were still being stripped of their citizenship at the altar until well into the 1930s. 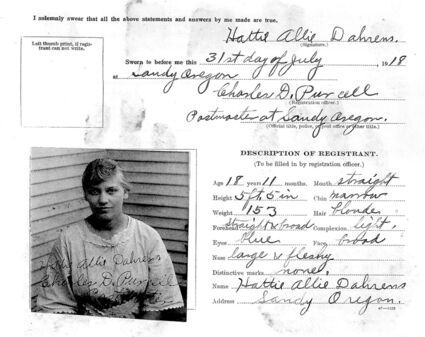 The enemy-alien registration form for newlywed Hattie Burbank Dahrens. Hattie was stripped of her American citizenship when she married logger Adolph Dahrens in 1918.

The enemy-alien registration form for newlywed Hattie Burbank Dahrens. Hattie was stripped of her American citizenship when she married logger Adolph Dahrens in 1918.

An example of the anti-German war propaganda posters depicting Germans as bloodthirsty "huns" in order to whip up popular support of American participation in the First World War.