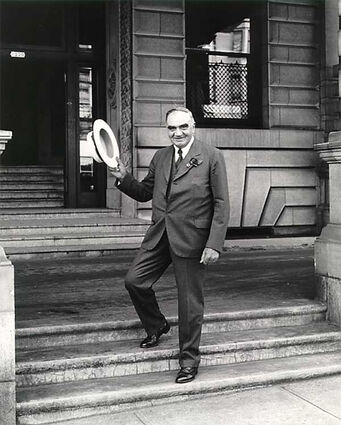 George L. Baker, the big, bluff, hail-fellow-well-met owner of Portland's Baker Theater, was flabbergasted. As he and his fellow Portland Rosarians were getting ready to march in the 1917 Rose Festival parade, a courier had run up to him with a cryptic message:

"The grand marshal's car awaits," the messenger puffed. "Hurry and get in and don't delay the parade."

"Since when?" Baker replied.

"Oh, all the time," said Moser. "We just made you grand marshal. But we couldn't get you on the phone and we forgot to tell you after the meeting. You've been grand marshal all along."

And Moser showed Baker a copy of the parade program. Sure enough, he was listed as grand marshal.

As Moser had clearly planned, the surprise honor had lowered Baker's shields a bit, and he allowed himself to be bundled into a massive, flag-draped, chauffeur-driven car. Promptly the door was shut and the car moved out with the parade column, headed for the streets of the town with him stuck inside, all by himself.

"But some of you fellows ride with me!" Baker wailed, no doubt suddenly realizing he'd been pranked.

But nobody did, and Baker had to endure the entire Rose Parade all by himself – and the jibes of the other Rosarians afterward.

"You fellows always want a fellow to be a good dog in a pinch, but this time it wasn't so funny," he grumbled afterward.

But this wasn't just any local businessman the Rosarians were pranking. Baker was within a week of being sworn in as mayor of Portland. And the fact that the Rosarians felt comfortable enough to pull a stunt like this at his expense is a good illustration of what was different about Mayor George Luis Baker.

By the time he'd finished his run as mayor of Portland, George L. Baker was probably the most famous mayor of an American city in the world.

He was a big, boisterous man, a classic early-1920s show-biz man of the cigar-chomping, back-slapping type. During his candidacy, the Oregon Voter had proclaimed him "the World Champion Loud Noise of the Northwest." He had big black expressive eyebrows which he probably augmented with charcoal, as old Vaudevilleans used to do, and his face seemed always set in a happy smile.

Baker's life story was like something out of a Horatio Alger novel. Born to a poor family in The Dalles, he dropped out of school when he was 9 to shine shoes and deliver papers in San Francisco, to help support the family. He soon found a steadier job in a Vaudeville theater, and with that, he'd found his life's calling. A gifted impresario, he quickly worked his way up through the ranks, and when he moved with his family to Portland, he soon was working at Cordray's Theater at Third and Yamhill streets – tending the animals there.

It was a low-ranking position, but it was a foot in the door. One thing led to another, and by 1901 young George was the proud owner of his own theater – Baker Theater – and building a Vaudeville stock troupe with a nationwide reputation. Soon after that, he was elected to the City Council, where he became the main opponent of then-Mayor Harry Lane's frequent anti-vice initiatives. (Baker thought vice crusades – anti-prostitution and anti-gambling initiatives, mostly – would succeed only in scattering bordellos and gambling dens all over the city rather than leaving them tucked away in the North End where they could be watched. History shortly thereafter proved him right about that.)

Finally, in 1917, Baker threw his straw porkpie hat in the ring for mayor. But it was a long shot; he was up against one of the most popular politicians of the day, union man Will Daly.

Luckily for Baker, Oregonian publisher Henry Pittock hated Daly, and in one of the more remarkable actions in the history of that otherwise-exemplary newspaper, had a staff member burglarize Daly's home and look through his papers. The burglar found a partially filled-out application for the American Socialist Party there. After Pittock published this ill-gotten information, Baker pulled ahead and won by a 1-percent margin.

As mayor, Baker was a wonder. He could be wildly inappropriate in the most adorable way, as in the time he almost caused an international incident by taking advantage of the reverent silence at France's Tomb of the Unknown Soldier to launch into a political stump speech, or when he welcomed international opera star Mary Garden with a big, publicly-bestowed kiss. (Historian Karl Klooster once quipped that part of his political legacy was "public bussing.") He personally saw Oregon soldiers off at the railroad station with tears in his eyes, bellowing, "God bless you, boys!" as they pulled out. He was a tireless and persistent booster of his city. The vast majority of Portland residents loved him.

Yet there was a dark side to Baker too. Every time trouble started brewing between workers and their employers, he would be found reliably on the bosses' side, and he'd bring every resource at his disposal – including, as he did during the 1922 dock strike, swarms of "Mayor's secret police" and "Portland Vigilance Police" officers to break up strikers. Claiming a violent revolution was imminent, he more or less suspended the U.S. Constitution for a mass arrest of all known union activists, trying (successfully, as it turned out) to break the power of the radical International Workers of the World in Portland.

His patriotic enthusiasm, forged in the First World War and tempered like lethal steel in the Red Scare era afterward, made him almost a poster boy for the "100 Percent Americanism" movement that brought the Ku Klux Klan to Oregon. In fact, there's some reason to suspect he may have been a member of the Klan; he was an inveterate joiner of fraternal organizations and societies, from the Shriners to the Elks. Certainly, he accepted and encouraged the Klan's support. Baker is the mayor who appears in a famous photograph, published in the Portland Evening Telegram in 1923, of city officials posing with two robed-and-hooded Ku Klux Klan officials.

And then there were the constant rumors of corruption in City Hall – the liquor tippling and trading, the payoffs by vice operators, the bribes and kickbacks. It wasn't entirely clear that the corruption went all the way to the top, but at the very least, some of Baker's lieutenants showed great moral flexibility.

Baker served as Portland's mayor for 16 solid years. But after 1924, Baker started losing popularity as the corruption of his administration started rubbing off on him. It didn't help that, after hearing rumors that he didn't plan to run for re-election for financial reasons, the president of the electricity-and-streetcar monopoly passed a kitty to raise a slush fund for him, which the donors used to pay off his mortgage.

In 1932, a recall petition was on the ballot. It accused Baker of "failure to enforce the laws against various social evils" and thereby giving "aid and comfort to the denizens of the underworld and to official graft and corruption connected therewith."

Baker survived the recall attempt, but 47 percent of Portland voters were now on record as wanting him out. A few months later, perhaps taking the hint, he announced he wouldn't run for re-election. 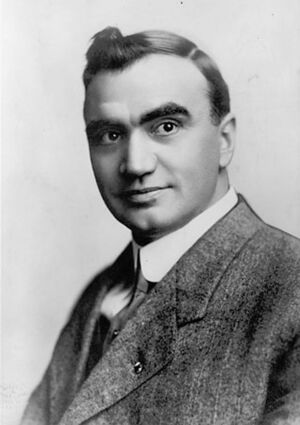 Mayor George Baker of Portland as he looked shortly after his swearing-in in 1917.

Baker died in 1941 at his home in The Tides, a resort that he owned in Seaside. And he's still remembered today, with a little help from the golden light of nostalgia, as one of Portland's most beloved and colorful mayors ever.