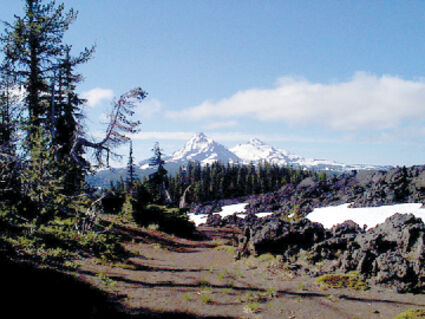 A number of beautiful snow capped mountain vistas are among the rewards for hikers who make a trek along the Pacific Crest Trail.

Reopening the Pacific Crest Trail (PCT) from the Mount Jefferson Wilderness through the Olallie Lake Scenic Area could be delayed until "sometime late August or early September," according to the U.S. Forest Service.

Access to 170,000 acres was closed to the public following the Lionshead and Beachie fires of Labor Day 2020. The affected area includes Pamelia Lake) to around Triangle Lake.

"There are some safety concerns around damaged and missing tread along steep sections of the trail," Willamette National Forest public information officer Tammy Robinson said in an email.

Robinson said work has been slowed by late-season snow that remained in the higher elevations north of Mount Jefferson.

"There are still some unknowns," Robinson said., adding that the agency still hopes to be able to let people access the closed sections soon.

"Opening closed areas continues to be a priority for our forest and the region as a whole," she wrote. "Safety signage is still needed in certain areas on the forest, and we are working to have that completed by the aforementioned timeline. Additionally, we are working through the closure revision process that can sometimes take a while as coordination is required with several resource areas."