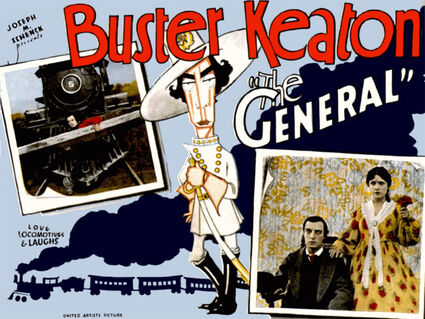 A vintage movie poster for Buster Keaton's "The General," a 1926 silent movie shot, in part, near Cottage Grove.

In the past 25 years or so, Oregon has come into its own as a place to make movies.

The iconic projects have come thick and fast, especially in the last 25 years or so. The last 15 years of the century saw The Goonies, Stand By Me, Drugstore Cowboy, Point Break, Free Willy (twice), Mr. Holland's Opus, The Postman, Ricochet River, and Men of Honor filmed here - along with dozens of others. And the 21st century so far has brought us Pay It Forward, Elephant, The Ring (twice), Fahrenheit 9/11, Into the Wild, Twilight, Coraline, and more than 100 more - including such unforgettable classics as "Kindergarten Cop" and "Jackass: The Movie."

And of course, we can't forget the burgeoning television business, highlighted right now by "Grimm" and "Portlandia."

But Oregon's relationship with the movie business goes back much farther - back to a time when parts of Oregon were wilder than much of Alaska is today.

I've cherry-picked 15 of the most influential of these early Oregon movies, and I'm going to start presenting them (in order from oldest to newest) this week. It will take three columns to do that.

These are, in my opinion (and of folks responding to a question I posted last week on the Offbeat Oregon History Facebook page) the most important movies, but there are more - lots more. For a definitive list, look up http://oregonfilm.org, or plan a visit to the Oregon Film Museum in Astoria.

The Fisherman's Bride was, as far as I've been able to learn, the first movie ever filmed in Oregon; it was shot in and around Astoria. It's a classic love triangle, with two young fellows - a good boy and a bad boy - battling over a lovely bachelorette. The girl chooses the good boy and they set a wedding date. But the bad boy plots his revenge by arranging to have the good boy kidnapped and shanghaied off on a deepwater sailing ship just before their wedding. This plan is, of course, foiled, and our hero gets to the church on time.

The interesting thing about this flick, other than its status as the state's first, is that it was not a period piece. While it was being shot, guys like Our Hero really were being shanghaied out of Astoria, for real, with some regularity. Melodramatic though the whole thing sounds today, something like it may very well have happened in real life during the time the film crew was there shooting this movie.

This was one of the most important movies of the silent era and a real study in contrasts. It crushed Buster Keaton's independence as a filmmaker, but it cemented his reputation as a comedic genius. It was widely regarded as a failure, yet its revenue margin was about 50 percent in the black - which is saying something because it was phenomenally expensive to make. It culminated in the most expensive scene of the silent era - in which a burning bridge collapses under the weight of a fully working steam locomotive, sending the whole works crashing into the Row River just southeast of Cottage Grove.

It's that scene that The General is most remembered for in Oregon.

The story takes place during the Civil War. "Johnny Gray," a Southern railroad engineer, has his beloved engine, The General, stolen by some Union spies - with his girlfriend aboard. Johnny gives chase in another locomotive, steals back both train and girl, and tries to make it back to the Mason-Dixon line while the Yankees give chase. Along the way, of course, there's plenty of Buster's trademark style of physical and expressive comedy.

The filming of The General's culminating scene brought locals out from miles around to watch, and about 500 Oregon National Guard soldiers were hired as extras. The event is commemorated with a mural on the side of the Cottage Grove Hotel today.

The wrecked locomotive was left in the river after the film was made, and became a popular visitors' attraction for Cottage Grove; it was salvaged for scrap iron during World War II, but there are still a few train parts in the riverbed today.

This fascinating film deals with some Old West topics that few movies want to touch - the experience of women, for one thing, and the indentured-servitude system of temporary enslavement.

In the story, a widower moves out west in the late 1700s with his young son; deciding they need a woman around the house, he buys the contract of an indentured servant named Rachel. He marries Rachel so that people won't think he's "living in sin" with her, but he shows no romantic interest in her until a handsome stranger comes to the area and begins to woo her. There is, of course, an Indian attack along the way as well.

Rachel and the Stranger was shot in the Springfield-Eugene area - at a stockade that the crew built along the McKenzie River, several scenic settings along the Mohawk, and at a rustic-farmhouse set built near Fox Hollow Road outside Eugene, among other spots.

"Bend of the River" is the first of two Westerns shot in Oregon featuring possibly the most universally beloved movie actor of all time: Jimmy "George Bailey" Stewart. It's also adapted from a historical novel by the late Bill Gulick - a historian who, despite his unfortunate decision to hang his hat over the border in Walla Walla, ranks among the very best popular scholars of Oregon history.

In this movie, set just after the Civil War, two gunfighters with checkered pasts are seeking a new start in a Westward-bound wagon train. When the wagons arrive in Oregon, they learn that a gold rush has broken out, and the man they bought their winter supplies from plans to renege on the deal, meaning the settlers will starve. The two men seize the food, fight off the supplier's goon squads, and head for the settlement. On the way, one of the two succumbs to the temptation to steal the food, and the other - Jimmy Stewart's character - has to fight him to save the settlement. 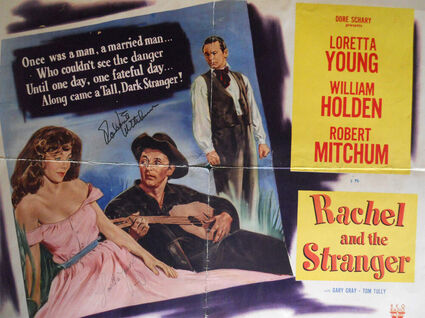 A vintage movie poster for "Rachel and the Stranger," a 1948 movie shot in the Springfield-Eugene area.

Portions of this movie were filmed on the Columbia and Sandy rivers, and there are gorgeous scenes showcasing Mount Hood, Rooster Rock, and Crown Point. Some of the scenes were also shot above timberline on Mount Hood, and a pair of working sternwheelers were in the movie as well. In fact, the last steamboat race on the Columbia River took place in a promotion for this movie, when the sternwheelers Henderson and Portland charged up the river from Portland to Rooster Rock. (Both of these sternwheelers were designed as towboats, so neither one was built for speed; however, their skippers gave it their best. The Henderson won, but blew a gasket in the process.)

Next week we'll continue this survey of iconic pictures filmed in Oregon with the other Oregon-based Jimmy Stewart movie, "Shenandoah."