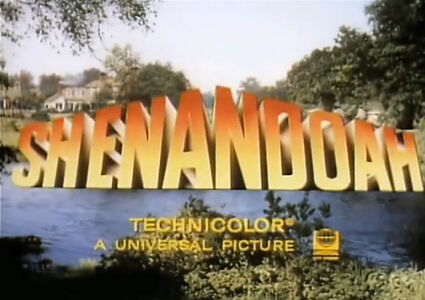 The title card for Shenandoah, a scene along the banks of the Mohawk River.

This is part 2 of a 3-part series on iconic Hollywood movies shot in Oregon. Last week, we looked at the era from the dawn of filmmaking through the 1950s. Today, we'll talk about movies made between 1960 and 1975.

Of course, this is not an article about popular cinema as a mirror of popular culture. But it's hard to miss the social changes these pictures showcase. The nation that produced Shenandoah, with its faint stirrings of uneasy anti-war sentiment still wrapped up in classic Technicolor-era Western form, was profoundly different from the nation that welcomed One Flew Over the Cuckoo's Nest, just 10 years later.

This remarkable Civil War movie was shot in various places around the Willamette-McKenzie-Mohawk delta, roughly centered on Springfield. This area bears a striking resemblance to the Shenandoah Valley, where the story takes place. The Mohawk Covered Bridge, on Paschelke Road near Marcola, played a prominent part in the movie.

On Anne Richardson's "Oregon Movies A to Z" Website, a Fall Creek resident named Joe Dairy remembered this particular project. "We found out they were filming this movie at our next-door neighbor's ranch," he wrote. "They filmed the scene on the bridge where Jimmy Stewart slaps a young soldier. We would ride our bikes to the shots, and our dog interrupted a few scenes by running onto the campfire set and scratching his fleas."

"We did not know who Jimmy Stewart was but this guy asked us about fishing the creek so we took him fishing with us in our front yard," Dairy continued. "Our dad spotted us and asked if we knew who the guy was fishing with us. We just shrugged and said no, just a nice guy from the film crew. He said, "Why, that's Jimmy Stewart."

Shenandoah tells the story of a successful Virginia farmer's unsuccessful attempt to keep the Civil War from affecting his family.

Although the movie came out well before anti-Vietnam War sentiment really stirred in American popular consciousness, it shows a dawning sense of moral ambiguity about armed conflict. There are no good guys or bad guys in this movie, and the moral of its story seems to be futility. This is particularly interesting given that Jimmy Stewart was a World War II combat veteran - a bomber pilot, in fact.

This extravagant production was the last dying gasp of the American musical. It was shot almost entirely on location on a picturesque little meadow in the Wallowa Mountains, about 45 miles out of Baker City.

In the movie, a rough-and-ready mining town with no women is suddenly blessed with the arrival of a Mormon man with two wives. Winkingly misogynistic hilarity ensues as the Mormon is convinced to auction off his surplus wife, and two other townspeople decide to share her, since if one man can have two wives - well, what's good for the gander is good for the goose, right?

Many locals remember a small colony of footloose, extravagantly bearded hippies camping in the park in Baker City during the production, offering their services as extras. This picture was about a bunch of hard-living miners in the 1849 Gold Rush, and Baker County in 1969 was not sufficiently rich in scruffy-looking people to keep the movie supplied; however, word had spread up and down the West Coast, and for the duration of the shooting, the average hair length of Baker County men probably quadrupled.

While the film was being shot, Clint Eastwood enjoyed fly fishing in nearby rivers, and Lee Marvin spent a lot of time drinking with locals in area taverns.

This moderately successful flick, directed by Paul Newman, was one of two movies made from the work of Oregon literary icon Ken Kesey. It was released to generally good reviews, but subsequent history wasn't particularly kind to it.

Except in Oregon, that is. Especially in the timber towns of Oregon, where people who knew the timber industry were impressed by how right Newman got it.

And MOST especially in the towns of Lincoln County where this flick was filmed - where hundreds of people had stories of hanging out, drinking, and shooting the breeze with the cast and crew of the film.

In this movie, a loggers' union has called a strike against the local big timber operator, and all the gyppo operators are expected to stop work in support, but one stubborn gyppo-logging family refuses.

This light-duty Western didn't get much respect when it was released, and it hasn't made up much ground since; however, its lighthearted tone has defused most of the criticism. It was filmed almost entirely in Oregon - mostly in Deschutes County, but also on the Rogue River.

The movie itself is a sequel to True Grit (1969). In it, the aging, hard-drinking Marshal Rooster Cogburn (Wayne) has been stripped of his badge for excessive use of force. Then he's called upon to earn his badge back by bringing a gang of bank robbers who have hijacked a wagon load of nitroglycerin to justice, with the help of a murdered preacher's adult daughter (Hepburn) seeking justice for her father. Hilarity (and, of course, exploding nitroglycerin) ensues.

This movie is probably the most well-known Oregon film, and there are plenty of things about it that make it straight-up creepy. First, it was filmed on location in and around the Oregon State Hospital - then as now a working mental hospital. That means there were actual crazy people in the building while the filming was being done; many of the extras in the movie are actual hospital inmates. Richard Levine of The New York Times tells a chilling story of a press junket in which he and other reporters were escorted around the state hospital and stumbled onto a group of hospital staffers trying (successfully) to resuscitate an inmate who had apparently "coded" after an unscheduled application of electro-convulsive therapy - apparently a punishment for some disciplinary infraction.

In this movie, a slippery con man named McMurphy wangles his way out of a prison sentence by getting himself declared insane. What he thinks is a deliverance from the prison work crew turns into something worse as he finds himself stuck under the power of the evil Nurse Ratched. McMurphy makes lots of trouble, leads an inmate rebellion, and ends up in a race to escape from the joint before something medically awful can be done to him.

The movie poster for Shenandoah - shot on location in Lane County, Oregon.

Next week, in the third and final part of this three-part series about iconic Oregon movies, we'll start things off with another movie from 1975 - one that seems a world away from the dark, subversive Cuckoo's Nest: Disney's sunny, perky, love-it-or-loathe-it Apple Dumpling Gang.