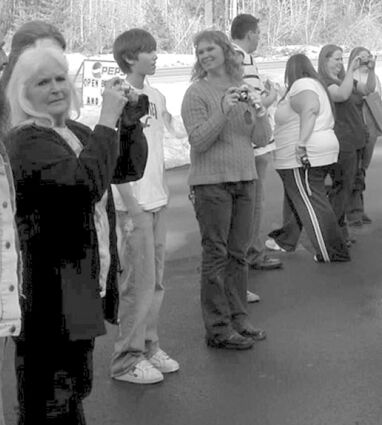 Dozens of camera shutters were in action when stars from the CBS TV show "Big Brother" made appearances in Rainbow. But the bigger news that week was about constructing new dams.

From the February 14, 2008 edition of McKenzie River Reflections

MCKENZIE RIVER: A San Francisco-based company has filed an application with the Federal Energy Regulatory Commission for a preliminary permit to develop up to nine new hydropower projects on the McKenzie River. Principle Power Hydro said the plants would be constructed between river mile 75 at Scott Creek (just upstream of Paradise Campground) and just above Leaburg Dam at river mile 41. Each could be similar in size to the Eugene Water & Electric Board's Leaburg or Walterville plants.

In the application company CEO Alia Weinstein notes the projects are designed to maximize power production while minimizing effects on "environmental, recreational and other resources associated with the river. This single preliminary permit application is being filed for this river reach because the proximity of the projects to each other indicates that environmental and other studies should be conducted on these multiple sites as a group under a single study."

Instead of damming the stream to create reservoirs or lakes, the proposal calls for the construction of diversionary weirs, noting that the river drops approximately 899 feet in elevation - from an elevation of 1,668 feet at the upstream end to 752 feet near Vida.

"We anticipate that approximately 8 or 9 stand-alone hydropower facilities will be sited and constructed on the river," Weinstein said. "However, the number and specific locations of the projects will depend on the results of a detailed feasibility study that will be conducted under the requested permit."

At this point Principle Power assumes the hydropower projects would involve the diversion weirs; penstocks, canals and possibly tunnels; along with powerhouses, (which may be located either within the riparian zone or away from the main river channel), and local power lines to connect to the pre-existing transmission system in the area.

User groups like American Whitewater are keeping an eye on the proposal. "We've heard similar claims for other projects currently under construction in British Columbia and they sure look like dams to us," according to AW's Thomas O'Keefe. "The total size of these projects on the McKenzie would be 83 MW which would represent a fairly significant footprint. By way of comparison, the hydro project on the White Salmon River is just over 10 MW."

In June of last year, Oregon passed a renewable energy law that requires the largest utilities in the state to provide 25 percent of their retail sales of electricity from clean, renewable sources of energy by 2025. The state also defined hydropower as a renewable energy source.

Although they haven't been approached yet, officials at the Eugene Water & Electric Board are aware of the planned projects.

"We would listen to any proposal they have," said EWEB spokesman Marty Douglass. "But we don't know if, in the end, we would purchase. We have a resource strategy now that is really trying to de-emphasize hydro a bit. And, it would have to be 'clean hydro' – that is as environmentally friendly - before we'd purchase it."

Douglas said that based on EWEB's own experiences in the relicensing of their McKenzie hydro facilities, the Principle Power projects could prove to be challenging. "It would not be a small matter to locate new facilities on the river," he said. "It will take some effort."

"AW will closely follow this project as it progresses and identify opportunities for public comment," O'Keefe says. "We don't yet have all the details but we believe our members will have serious concerns with the industrial development of this spectacular whitewater resource."

Eventually, plans for the development were shelved.

Other stories in the 2/14/2008 edition included EWEB's offer to buy 2.9 acres in Vida for a new boat ramp, OSU's "Clear Lake Connection," and a Sheriff's Office complaint from a Greenwood Drive resident that nearly every house on her street has experienced some kind of vandalism over the past few days.

To get a copy of the entire 8-page edition, go to: tinyurl.com/awbj2zsy