From the April 17, 2008 edition of McKenzie River Reflections 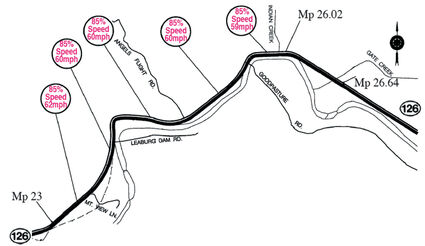 VIDA: A request to drop the speed limit on Hwy. 126 between Indian Creek And Mountain View Lane wasn't supported by a recent traffic study by the Oregon Dept. of Transportation.

The report to Lane County from Edward Fischer, ODOT's State Traffic Engineer in Salem, found a high percentage of the vehicles traveling through the area were traveling faster than the posted 55 mph speed limit. The county had requested the speed be dropped to 45 mph, in anticipation of the Eugene Water & Electric Board's plans to construct a new boat landing nearby. ODOT looked at a number of characteristics including crash history, prevailing speeds, traffic volumes, highway geometry, and roadside culture and density. Fischer observed

"The primary factor used in establishing speed zones is the 85th percentile speed (the speed at or below which 85 percent of the vehicles are traveling).

The findings, though, could result in more traffic enforcement along that stretch of highway. "Since the speed zone investigation shows that 52 percent of the observed vehicles were traveling over the posted speed," Fischer wrote, "I am also sending a copy of this letter to the Oregon State Police to let them know the results of the speed zoning investigation."

Fischer also commented on possible impacts of the proposed boat ramp near the Goodpasture covered bridge. "Our Region Traffic office is working with the County, EWEB, and OBEC to investigate possible improvements to the highway to accommodate traffic going to the boat ramp," he noted. "While we are not recommending a reduction in the speed zoning, other changes to the highway will improve the safety of the new intersection."

EWEB spokesman Marty Douglass said whether or not the travel speed was reduced would have no impact on the project.

"What we're talking to ODOT about is the sight distance, the need for a right turn deceleration lane, and a possible center turn lane. They'll make that determination to us independent of whatever speed limit they decide to have up there."

Douglass said the utility is working on finalizing the design proposal for the boat ramp, parking, and other aspects of the facility. "I think they're going to want a final design that shows where the entrance and exit points\ are. If we can get an indication from them ahead of time whether or not a center turn lane will be required, that would be good."

Currently, EWEB planners hope to have their proposal ready to put before the public at a couple of public meetings likely to be scheduled for early May.

"We want to run the designs by those people who are interested," Douglass said. "Then we can go to work on all the land use issues."

House to be used for fire training

EWEB to burn house it bought

WALTERVILLE: Travelers can expect to see smoke and flames

as well as a lot of fire apparatus this weekend. A house owned

by the Eugene Water & Electric Board (EWEB) will be used by

McKenzie Fire & Rescue for a "Burn to Learn" exercise this

The house, recently purchased by EWEB, is located at 39429 McKenzie Highway. It is located east of the Walterville Shopping Center and just before the point the highway crosses the Walterville Power Canal. Training activities are scheduled to begin at about 9:30 a.m. on Sunday morning.

"We don't have many opportunities to train on a stick-built house," says McKenzie Fire & Rescue Chief Dale Ledyard.

"This type of exercise really benefits the fire department." McKenzie Fire & Rescue has already used the structure for three different drills - including search & rescue, and the simulated rescue of firefighters, Ledyard said. About 20 to 25 people will participate in Sunday's exercise, he said.

The fire department will post signs in each direction on Sunday morning.