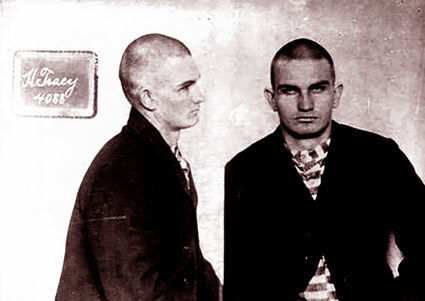 Harry Tracy as he appeared in his prison booking photo in 1901.

The "Golden Age of Outlaws" had a good run - almost 40 years. It kicked off just after the Civil War when thousands of battle-hardened Confederate veterans with nothing to lose spread out across the Western frontier; and it ended in a field in eastern Washington on Aug. 5, 1902.

That was the date when the last Golden Age outlaw, Harry Tracy, went out in a blaze of gunfire following the bloodiest prison break in Oregon history, followed by a two-month-long, even bloodier manhunt.

Harry Tracy was the last of the breed of Wild West outlaws like Jesse James, Butch Cassidy, and Billy the Kid. He wasn't technically an Oregonian. His real name was Harry Severns, and he was born in 1875 in Pittsville, Wisconsin, a child of a highly respected and successful family. He was bright, outgoing, and likable, and he gave no early signs to anyone that he might be headed for a life of crime and murder.

(There are some sources that claim otherwise, but they're either spinning stories or quoting sources that are. During the two months when Tracy's name was in the national headlines, the public was hungry for stories about him and many idle rumors got quoted and embellished in newspapers and quoted later in magazine stories. Some of these are still being represented as facts in pulpy retellings today – such as the false claim that a teenage Tracy raped and murdered his Sunday School teacher.)

That changed, though, soon after he left the nest. He changed his name to Tracy and launched a career in robbery and theft that led him to a gunfight with a pursuing posse in Colorado, in which a member of the posse was shot and killed. He was arrested and imprisoned. Within a short time, he escaped, skipped town, and did it again.

By the time Tracy arrived in Portland, he was still only 23 years old, but he'd been in plenty of trouble. By the standards of his peers, he wasn't a particularly successful robber, but he was remarkably good at breaking out of jail. He'd escaped from several jails and prisons in Colorado and Utah and apparently picked Portland as a good place to get a fresh start.

He may have planned on going straight in Portland – settling down, starting a family, thinking about the future. Certainly, there was an unusually long period of time, between when he arrived in Portland and when he started getting in trouble: three years. Tracy wasn't a very skillful criminal, so it's most likely that he actually wasn't committing crimes during that time.

However, eventually, Tracy got back into the business, and he and Merrill started pulling stick-up jobs around town. They went about it with a particular style and panache that quickly got them into the headlines as "The Mackintosh Bandits" and "The False Face Bandits."

Portland police, trying to find the culprits, started "rounding up the usual suspects," contacting various crooks and suspects that they knew to be at large in town. Tracy, a relative newcomer to Portland, was not on that list. But, unfortunately for him, David Merrill was, and when a detective dropped by for a surprise visit to check him out, he found clear proof that Merrill was one of the Bandits. He found him hiding upstairs, and arrested him.

Then the cops lurked in the house and waited for Tracy to return.

The sources aren't completely clear on this, but it appears most likely that the reason Tracy wasn't at the house was that he was actually in the act of robbing a nearby butcher shop at the time. Coming home with the loot, Tracy saw a strange, well-dressed man waiting for him, and decided he didn't like the lay. He turned to run, trading pistol shots with the detective as he fled. A streetcar was passing by and he jumped, grabbed onto it, and rode it safely away.

But the streetcar's driver wasn't having any of that, and after he realized what was going on he stopped the streetcar and actually disabled it, so that if Tracy tried to hijack it at gunpoint it wouldn't do him any good.

Tracy jumped off and started to flee again. But by an odd coincidence, the car had stopped right outside the front door of the butcher shop that he had just robbed. The butcher's son was ready with a shotgun full of bird shot, which Tracy have at relatively close range.

Wounded, Tracy managed to run a short distance but was quickly surrounded and arrested.

And that is how Harry Tracy came to be a resident in the Oregon State Penitentiary. He and David Merrill both "checked in" in late 1901.

According to the book by the pseudonymous Prisoner No. 6435, both Tracy and Merrill were in a lot of trouble as prison inmates. The glib, friendly Tracy was able to talk his way out of a lot of trouble; but Merrill was always a problem, and the warden took to keeping an "Oregon Boot" shackle on him for extended periods of time. He wore the boot so often in his short time in the pen that it actually disfigured his ankle.

Then came the morning of June 9, 1902. That was the day Tracy had planned for their breakout.

He had gotten someone to sneak some money in for him, and he'd used it to bribe someone - nobody knows who, to this day - to hide a pair of .30-30 Winchester rifles in a pattern box in the prison foundry. He had also bribed a soon-to-be-released inmate named Harry Wright to, after he was out, get a rope ladder and toss it over the prison wall for them. Wright had been released on schedule and had done his bit. They had the ladder. All was in readiness.

So on that morning, Tracy and Merrill reported to work in the prison foundry, went straight to the designated boxes, opened them up, reached inside, and came out shooting.

The two guards in the room were shot dead before they knew what was happening, and the two men ran to the door.

Outside, they shot the guards out of the two watchtowers closest to their ladder, shot a fellow inmate who tried to stop them and used a fifth guard, who they had taken at gunpoint, as a human shield while they retreated out of rifle range. Then Tracy coldly murdered the "shield" and they ran.

What followed was a two-month manhunt covering most of northwest Oregon and much of western Washington, as Tracy and Merrill tried to make it to Hole-in-the-Wall Pass, Wyoming, headquarters of the Wild Bunch gang - not knowing Butch Cassidy & Co. had fled to Argentina the previous year.

Posses were on their track almost immediately, of course, and bloodhounds were brought in from Walla Walla; but Tracy circled around and mixed his scent with that of the posse, and the dogs lost his trail.

The governor offered a reward, then doubled it. As the weeks went by the reward was raised until it was $8,000, alive or dead. That's $280,000 in modern currency - an enormous bounty. This inspired dozens of ad-hoc packs of citizens to grab a shotgun and a flask of whiskey, posse up, and join the hunt.

The result was a chaotic landscape of heavily-armed drunks looking hopefully over every backyard fence for signs of Tracy and Merrill. 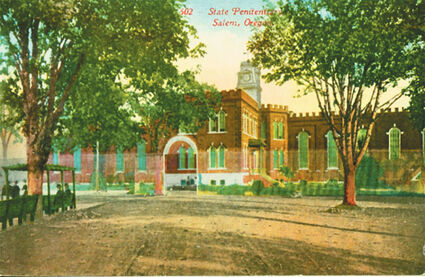 The Oregon State Prison yard as it appeared circa 1905 - just a few years after Tracy and Merrill made their bloody break for freedom.