Preliminary plans up for review 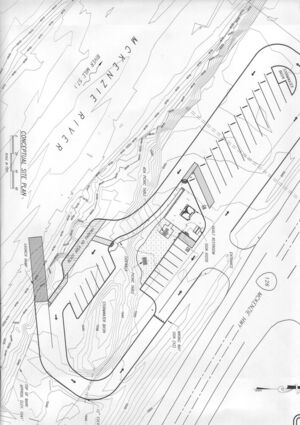 Changes under study for the Forest Glen Boat Landing could include consolidation of three launches into one and the construction of paved parking for 15 cars and 12 boat trailers.

FINN ROCK: Representatives from the Oregon State Marine Board (OSMB) and Lane County Parks brought a preliminary peek at what a rebuilt Forest Glen Boat Landing could look like during a presentation at the McKenzie High School gym on Monday night.

Lane County Parks Manager Brett Henry stressed that what people were being shown was just a preliminary concept designed for generating public input. Two key components of the proposal included the launch areas and parking.

Currently, several users of the site have been parking vehicles and trailers in the right-of-way along Hwy. 126. Under the proposal, a new parking area, inside the 2-acre park site, would be constructed to accommodate vehicles and boat trailers.

Another change under consideration is the consolidation of three launching ramps into one. A hydraulic study has shown the two downriver ones are likely to continue to be undermined by the river, Henry said. It's possible though, that the single upstream launch area could be widened, he added.

When the hydraulic study is completed, the planning process will also have to include a review of cultural/historic and wetlands issues, according to OSMB Senior Engineer, Joshua Tacchini. He expected those could be finalized by June. That would likely lead to another public meeting this Fall.

It's also expected a finalized plan could be sent for the U.S. Army Corps of Engineers permit review at the end of 2023.

However, that final permit process could range from 18 to 36 months, cautioned OSMB Facilities Manager Janine Belleque.