Driver created a "parade" of backed up cars 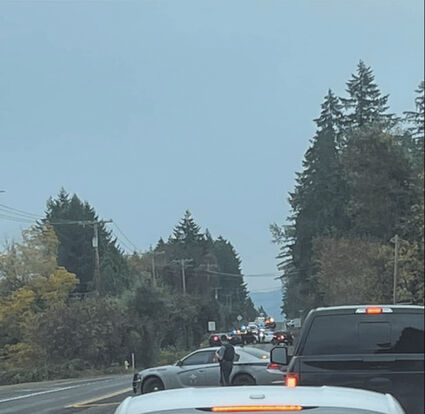 Traffic along Hwy. 126 was pulled over just west of Cedar Flat as police set up a tactical maneuver to get the driver of a Kia Soul to finally stop.

THURSTON: Police responding to a report of a very slow vehicle last Thursday found a line of about 30 cars had built up by the time they caught up with it. Initially, the caller had reported he was behind an eastbound Kia near the Walterville Elementary School. A Lane County Sheriff's Deputy was finally able to get the driver of the cream-colored Kia Soul to stop before directing the driver to pull into the Ike's Pizza parking lot by Leaburg Lake.

The driver reportedly almost ran over a deputy before heading back onto the road and heading west.

According to the Lane County Sheriff's Office, deputies were aided by personnel from the Oregon State Police and Springfield Police Department. To get the vehicle to stop, a spike strip was put out on the roadway and Springfield Police initiated a PIT maneuver (precision immobilization technique) that forced the fleeing car to turn sideways abruptly, causing the driver to lose control and stop near Milepost 8 at about 3:09 p.m. The driver, later identified as Heather Togher, was taken into custody.