Fish racks and the early hatcheries 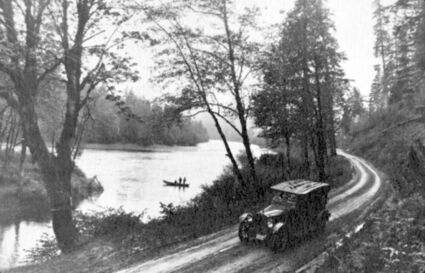 The curve on the Old McKenzie Highway where Minney grew up.

We've probably all seen the old "Traveling The Old McKenzie Highway" photo that shows a touring car rounding the bend of the narrow, graveled road that used to run up the valley, A closer look at that photo, however, unlocks some of the early history of the area and gives some insights into the business of fish hatcheries and the raising of fish stocks that now play such a big role in our local economy.

One man who can take a look at that picture and talk for hours about it is Art Minney (formerly of Walterville and now deceased) who spent many of his early years in the area shown by the photo. Taken in the days before the creation of today's manmade Leaburg Lake, an island that is now flooded is visible to the left as well as some curious tripod-shaped structures located both on the island and across the other side of the river.

These tripods or 'horses' as Minney called them were used to build fish racks across the entire river. By building the racks, early hatchery workers were able to catch spawning salmon and take them to dry land or fertilization of the eggs

"I wasn't born until 1911 but I can remember from 1915 on," Minney said. "My Dad worked at the Leaburg Hatchery for a number of years part-time. We used to go down and live on the island, We stayed there for the summer and lived in a tent while my dad was working, rather than ride a bicycle or horseback two and a half miles to where we lived. I was only 4 and my mother tied me to a tree to keep me from drowning in the river. The bank was fairly high there on the stream."

Both Minney's father and grandfather worked at the hatchery when Matt Redmond was the manager, probably back in 1908-1911.

Art explained how the trout were caught in those days."Mostly in the beginning, McKenzie River natives were captured by trapping them in the tributaries themselves. They'd run up the side streams to spawn in the spring and they'd put these weir racks across the streams and build a box-type trap. The fish would migrate upstream and end up getting dipped out and spawned artificially, with an upstream 'V' facing into the current the fish would go into a box trap about 6 or 8 feet square. They were there to stay until someone came along with a dip net."

Salmon, however, were captured by building a weir across the entire river to stop the fish from migrating upstream.

"The horses (or tripods) were spaced across the stream either by being pulled into place by a team or a ferry boat or scow," Minney said. "They were dumped off about 15 feet apart until you spaced the whole span of the river. Large three-quarter to seven-eights inch cables was later placed across the stream from bank to bank at sufficient height to carry the horses into position."

"You'd line your horses in a straight line using 50-foot poles as stringers, parallel to the water. Placed three high with 15-foot spacings between the horses, one set of poles would probably go across a span of 45-feet. In order to get strength, you would put butts to tops in serious stream pressure. After the stringers are placed, you take 2x3's of sufficient length to clear high enough so during a flood the fish won't swim over the top. That creates a hazard for the man in charge because when he gets his water too high and can't keep it clean, it's just one more dam to break out. Then your fish just go hustlin' upstream."

As an example of theoretical versus practical knowledge, Minney recalled an experience he had on the South Santiam in the 50's. A weir he built there washed out on the bank side in a channel where the water pressure hit. Although each horse had been weighed, Minney's boss was sure even more rocks should have been added."I tried to explain to him why I didn't want to do it but he was the boss and I was working there," he said. "No matter if you put more weight on them, you're still dealing with kindling."

"I put it in the way he wanted it done and spent a lot of time digging rocks off the bottom. We had another flood and of that span of 25 horses, only three were left! I knew that would happen, but I had to prove my point. Anyway, after that, he left me alone."

Driving nails underwater was another problem easily overcome with experience. "You need a sledgehammer to drive a 12-inch spike. You don't use a hammer," Minney said. "And of course, you can't slug those nails in the poles without making an awful splash. Then your sledge will cut off and you can't see where it's going anyway."

The solution was a pipe gun - a three-quarter-inch pipe with a sliding rod inside. The pipe gun could be loaded with a nail and pressed against where the spike was wanted. Sliding the rod inside the pipe provided a dry, sure way that even Jacques Cousteau would have approved of.

Those 2x3 vertical pickets extended all the way down to the river bottom and were gapped about 2 inches apart, Minney said. Also, spacer blocks were added so that the powerful salmon couldn't nose their way through into the deeper water. 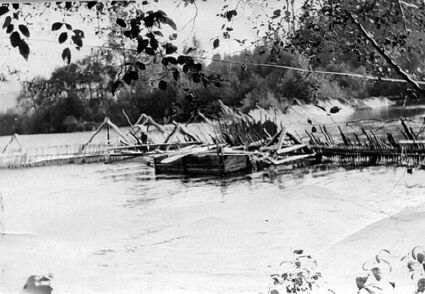 Structures, called weirs, were constructed across the entire river to stop the fish from migrating upstream.

"The salmon run from April, May, and June to the tributary streams with a built-in homing instinct. As the water warms up in the summer weather, a lot of them will die off. They all spawn at the same time, but the Fall Chinook comes in fresh from the ocean and makes a quick run upstream. They spawn in August and September. You can tell when fish are ready to spawn. They all drift back into the shallow water where they're trapped, looking for the best gravelly area. Without the trap, it'd sort of be like trying to put salt on their tails to catch them. You run around with a boat and a net, heading them into shallow water. Then you have to go in and sort them out. You have to pick the ripe ones and store them in box traps, in fresh running water. Those fish that are close can fool you. You waste a lot if you don't get pretty catty on deciding which ones are ready and which ones are only close," Minney remembered.

That decision is another area where experience pays off since only old hands were able to tell exactly when the fish are ripe.

"It's a matter of trial and error, standing around and watching someone who does know and feeling a few of them," Minney admitted. "Holding one up by the gills and seeing a few eggs come out can fool you because they still can be green up around the gills. You just have to pretty much know by the sag of the vent," he said.