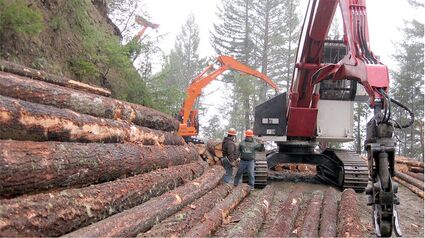 More than 40% of Oregon adults say the state’s forests are over logged, but most also believe that harvesting timber is part of maintaining healthy forests, according to a recent survey.

In November, the nonprofit, nonpartisan group Oregon Values and Beliefs Center sent an online survey to residents statewide to learn about their attitudes toward logging and the health of state forests.

Nearly half the state is covered in forests, and Oregon is the largest source of lumber in the country, according to the Oregon Forest Resources Institute, a group created by the Legislature in the early 1990s to support the growth of the state’s forest products industry.

The federal government owns most of Oregon’s forestland, but very little logging occurs on them. More than 75% of logging in Oregon occurs on about one-third of the state’s forestlands, owned and managed by the state or private landowners.

Despite many feeling too much logging is taking place, more than three-quarters of all respondents said that forest management practices, including commercial timber harvests, are important to maintain forest health. This management also includes thinning, prescribed burns, replanting trees, and protecting old-growth trees from being logged.

More than half of the respondents support collecting wood debris left in forests from logging and converting it into biofuels, such as biodiesel for cars and trucks, or for electricity. But about 30% said they did not know enough about biofuels and the use of woody biomass for energy to have an opinion.

Proponents of such practices say using castaway wood from logging for biofuels is a way to take a renewable resource and create less carbon-intensive fuel than coal, oil, and gas. But conservationists argue it incentivizes the destruction of forests for wood that can be used for fuels, and that it’s inefficient given how much it costs to collect and transport wood to facilities that can process it into biofuels.

There are currently 15 power plants in Oregon that use woody biomass to generate electricity, according to the watchdog group Citizens’ Utility Board.

Most survey respondents said they support using public and taxpayer dollars to reduce some logging in order to keep more trees and old-growth trees in the ground to suck up carbon dioxide in the atmosphere and help combat climate change. Respondents said they were less supportive of doing so for large, industrial land and forest owners.

More than three-quarters of respondents want the state to provide funding for urban and rural tree planting programs and about half of the respondents believe at least half of all of Oregon’s forests should be set aside as wilderness areas where commercial timber production cannot take place.