A history of fly tying 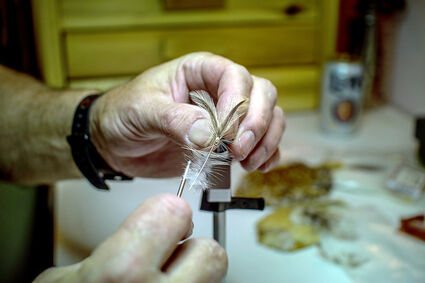 Most of us have noticed fishing flies for sale somewhere here along the river. They are casually bought and sold in tackle shops, hardware stores, gas stations, restaurants, and taverns from Springfield to Sisters - thousands of them every year. Hundreds more are made and fished by individuals, who add to the pleasure and satisfaction of their sport fishing with flies of their own manufacture. Though the numbers increase yearly, the demand for professionally tied flies increases at an even greater annual rate. This has generally been the fact since flyfishing became a popular sport among English gentlemen of the 18th century.

Fly tying probably originated in the common sense approach of a man observing fish feeding on natural insects or examining the contents of their stomachs, and attempting to lure fish to his hook by "dressing" it to imitate this natural fish food. When man first wrapped feathers around a hook, we will never know, but he started a method and tradition in angling that has grown in scope and popularity ever since. Though artificial flies were used in ancient china and Japan, the first known historical description of a man-made insect imitation is from Aelian, a Roman naturalist of the 3rd century A.D. He wrote of fishermen in northern Greece angling for what were almost certainly trout. Simply made of red wool and the hackle (neck) feathers of a rooster, these flies would be considered crude by modern standards, but the artificial fly has come down to us basically as it was at that time: a bit of fur and feather wound on a hook by hand.

Flyfishing and tying undoubtedly came to Britain with the Roman legions, but the first known reference to fly tying (or fishing) in the English language came twelve hundred years after Aelian, in 1486. Generally attributed to Dame Juliana Berners, Sister and Prioress of a nunnery at Sopwell, near St. Albans, England, the "Treatise on Fishing with an Angle" gives detailed instructions on the design and use of rods, lines, and leaders for flyfishing, as well as a description of twelve artificial flies. The greater part of the book concerns bait fishing for trout and salmon as well as several other species, and became the standard reference of sport fishing for nearly two hundred years. One of the first books printed in England, the "Treatise" was a best-seller of its day, and reprinted several times before its list of flies was included in Izaak Walton's "The Complete Angler," first published in 1653.

Dame Juliana's original twelve' flies were probably based on natural insects observed at streamside, but only a few of them can be positively identified with such insects today. Constructed mainly of wool and various bird hackle and wing feathers, they were crude but effective. Like today's artificials, they probably didn't look much like the naturals in hand, but gave a reasonable impression of them to the fish when in the water. Most artificials, both historical and modern, are of this "natural" or impressionistic type, but there are also "attractor" type flies that represent nothing but the tiers' imagination, though they may have a generally "buggy" appearance. Also, these early flies were tied entirely by hand, before the use of a small jawed vice to hold hooks as the materials for the fly are wound on them. As the art of fly tying developed, so did its tools: the vise, hackle pliers, finely pointed scissors and tweezers, and bobbins to hold spools of thread, which are considered necessary to the craft today.

Izaak Walton was neither a fly tier nor a fly fisherman, but his friend Charles Cotton was. Cotton wrote the first essay on flyfishing for the fifth edition of Walton's book (1676), including a list of sixty-five flies, their dressings (patterns), and written instructions for tying the flies. Cotton's, and the only type of flyfishing practiced until the mid-nineteenth century was with "wet" or subsurface flies. Even so, experimenters with the fly had produced the nymph and streamer types of wet flies, and fly patterns numbered in the hundreds by the time the dry fly was becoming popular in the 1890's. The advent of the dry fly, fished as a natural fly riding on the water's surface, led fly tiers to imitate the insects fish took them for more exactly. Frederick Halyard, the leading proponent of these new methods in England, sent his dry fly imitations of English insects to American Theodore Godson in 1890. Both these men were dedicated Flemishes, fly tyros, and voices for flourishing through their writings on the sport published on both sides of the Atlantic. Halyard wrote the first insect identification guide for dry fly tiers in his "Dry Fly Entomology" (1897). Godson adopted Halberds methods and patterns to match North American Insects, and the modern American dry fly was born.

Gordon's influence was so great, he is acclaimed as "The Father of American Dry Fly Fishing." Some of his original fly patterns are still in use, and just as effective in our Cascades as they were in New York's Catskills, where Godson did most of his fishing. A Catskill style of fly tying, especially of mayfly imitations, continues to the present day, and can be traced directly to Theodore Gordon's tying bench. Since Gordon's time, there have been many innovations in fly tying, mainly in the use of newly developed materials, or emphasis on techniques to produce certain desirable effects. In some cases, new materials have led to new types of flies, a material enabling the tyer to make his artificial in a way not possible or extremely difficult with materials previously available. Similarly, flyfishing methods have been influenced by the use of new materials and designs of rods, reels, lines, and leaders. These new fishing methods always seem to call for new fly patterns. The dry fly vs. wet fly controversy of 1900 has been complicated by men fishing artificials in lakes and streams at every depth from top to bottom.

The modern artificial fly that we see on sale is the product of a professional tyer, but unless he is employed full time by a large tackle company, or sells large numbers of flies at the wholesale level, tying flies is a part time activity that provided only a small part of his income. Many professional tyers are housewives, retired persons, students and people who are seasonally employed, usually working out of their own home. The flies they tie are sold to wholesalers, retailers, or directly to fishermen, and are generally of average quality. The true professional, who derives all or most of his living from fly tying, usually produces a superior product, and has often built a reputation on a particular pattern or style of tying high quality fishcatchers. There is a point where skill, talent, and craft combine to become art; the very best tyros are considered masters of the art of fly tying, and deservedly so. All of them tied thousands of flies before gaining recognition in the field. The master, or even a true professional fly tyer may be considered a rare breed, but one that will always be with us, as long as there are free-rising fish in the streams.