Shelter with a shed 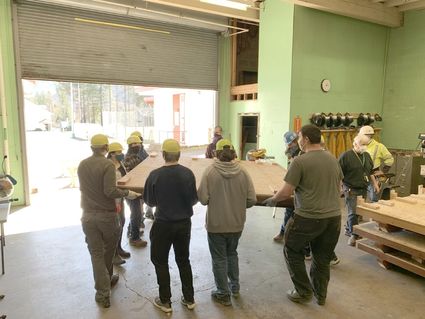 Shed assembly is a group effort at the McKenzie Schools shop.

FINN ROCK: Students from McKenzie School District have partnered with Sheds of Hope, Lane Education Service District, and Northwest Youth Corps to build replacement sheds for people who lost a structure in the Holiday Farm Fire.

The students will earn graduation credit in math and fine arts (construction). Now, nine students are working on the 8-foot x 8 foot sheds assembled as kits at the McKenzie River Community School shop. When completed, the sheds will be delivered to a property site for set-up and roofing. Students are working on five sheds with hopes of building up to 15.

The Sheds of Hope project was developed in Lane County following the Holiday Farm Fire as a One Hope collaboration, according to Blue River's Living Water Family Fellowship pastor Doug Farrington. By April 10th, 61 new sheds had been delivered to people who lost homes in the fire, and a total of 120 property owners have applied. "One Hope brings together pastors, leaders, and churches to collaboratively serve Lane County," Farrington said.

Pastors in Eugene and Springfield worked hand-in-hand with Pastor Farrington. His church burned, as did his home. Dozens of Living Water church members faced the same loss. In the days following the fire, he said he began to see a family of churches standing with him, as they discussed how to collaborate and serve together.

Farrington said an opportunity presented itself in a community meeting with local volunteers, Lane County leaders, and FEMA. Margaret Beilharz suggested that new sheds gifted to fire victims would provide a small, but significant, first step on the rebuilding journey.

A few weeks later in a community meeting, the pastor volunteered to be the "Shed Guy," knowing the support of his pastor-friends downriver. He felt it was clear the recovery effort One Hope partners would focus their collaboration on would be Sheds of Hope.

A team went to work experimenting with plans and fine-tuning them so any group could build a shed. Retired friends at Camp Harlow went first, then Kaminski Construction joined the effort. Soon after, the project hosted three build days for teams to learn to build sheds themselves.

Builders then took the plans back to their own churches. One planned to build twenty sheds, but raised funds to construct 26 sheds. Another church shared funds with other congregations, so they could build as well. By December 2020, the momentum was building.

From the beginning of the recovery effort, Lee Kounovsky, Lead CTE Construction Specialist for Lane County high schools, was dreaming about sheds too.

By late Winter, Kounovsky had gathered all the necessary parties, and Lane County high schools (Lane CTE programs) set their building plans in motion. In partnership with Sheds of Hope, they will build more than 20 sheds, recruiting community members and construction companies to mentor students as they build. As high school students give back to the community, they're gaining hands-on trade skills and job experience, building relationships with positive role models, and receiving math and elective high school credits.

Organizers say Sheds of Hope is a small, first step toward recovery. Yet its impact on those who give and those who receive will stand long after the final shed is complete. For years to come, people who drive along the McKenzie River will see Sheds of Hope lining the route - as monuments to a community that stands together.