Fences and rock walls could be added 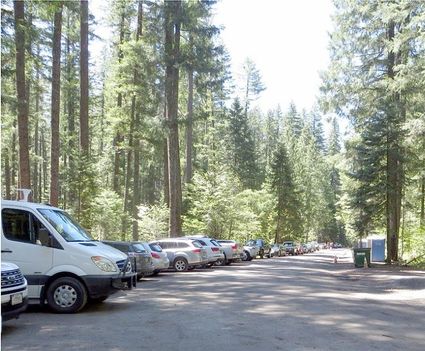 The current parking lot area is often a traffic bottleneck in the summer, particularly when an emergency response is needed.

MCKENZIE BRIDGE: The public is being asked to comment on plans aimed at dealing with overcrowding at the Tamolitch Falls/Blue Pool area of the McKenzie River National Recreation Trail.

Under consideration are projects that call for the trail to Tamolitch Pool to be re-routed from the west to the east side of the river by decommissioning approximately two miles of trail and constructing approximately three new miles of trail. In addition, Tamolitch Pool would be closed to all swimming to protect public safety, water quality, and riparian vegetation.

Part of the Draft Environmental Assessment notes that Tamolitch Pool is surrounded by steep cliffs and has a year-round water temperature less than 40 degrees, deep water with shallow rocks, and water that is so clear it is difficult to judge its depth.

Other problems mentioned include a dramatic increase in the numbers of people visiting the area resulting in, "chaotic and disorganized parking, crowding, and restroom lines. While on the trail, visitors experience regular and recurring encounters with other visitors and groups, especially during the summer months. The resulting heavy foot traffic has led to trail width expansion, riparian vegetation trampling, erosion, trash, and unmanaged human waste."

The Eugene Water & Electric Board has also requested that the Willamette National Forest manage the Tamolitch recreation to, "to reduce the unpleasant interactions, safety hazards, and potential security risks around their campus."

The pool itself would be closed to all swimming, enforceable by the Forest Service, with an anticipated fine ranging from approximately $100 to $300.

Other details might involve creating an emergency helicopter landing site for medical evacuations approximately 1/3 of a mile to the south and out of sight from the pool.

In addition, a video camera could be installed at the entry station of the parking lot to provide a livefeed to the McKenzie River Ranger Station's front desk.

Comments on the proposal can be sent by May 29th to: shorturl.at/ehBGT or to Darren Cross c/o Dean Schlichting, McKenzie River Ranger District, 57600 McKenzie Highway, McKenzie Bridge, Oregon 97413.