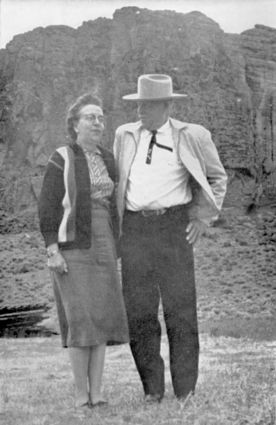 Reub and Eleanor Long stand in front of Fort Rock, the extinct volcano that they deeded to the state of Oregon for a park. Fort Rock has been the site of some of Oregon's most important anthropological discoveries, including the oldest footwear ever found anywhere - a pair of 11,000-year-old sagebrush sandals.

There was a time, and it was not too long ago, that the state of Oregon had something of a reputation as a place for great liars.

Now, by "great liars," I mean tellers of the GOOD kind of lies, not the kind of lies various politicians are throwing around right now. I'm talking about the "Paul Bunyan, Casey Jones and Pecos Bill" kind of liars.

One such "great liar" of honored memory is a lively Eastern Oregon fellow named Reub Long.

You may recognize Reub's name if you've ever lived on the "dry side" of the Cascades. He's also the homesteader who deeded Fort Rock to the state of Oregon as a park. Fort Rock, of course, is where they found the world's oldest shoes - a pair of sage-bark sandals from 11,000 years ago.

And, oh yes, Reub could tell a story.

"I don't lie to people, exactly, but it's fun to baffle them," he wrote in his book, by way of explanation.

In one case, Reub baffled a group of businessmen from the Bend Chamber of Commerce when they came to his ranch and were looking over his collection of antiquities - Native American artifacts, fossils, stone utensils, animal bones. The businessmen were especially interested in a skull from Reub's collection; it was from a mountain sheep.

One of the businessmen commented on how thick the bone was between the sheep's horns. "I suppose that is to enable them to fight, the way I've heard they did, without injuring themselves," he said, according to Reub's recollection.

Reub saw his opportunity. "Yes, that is part of the reason," he said smoothly. "But those thick skulls are on the females too, and they don't fight. The sheep grazed on mountainsides, too steep and rough for other animals. Often a mountain ledge will follow along for hundreds of feet, then pinch out ... When they got into such a deal, they couldn't back up without stepping off the ledge. These thick skulls saved them. They'd calmly hurl themselves off the ledge, head down, and they could land on the rocks below without harm."

Clearly not quite buying it, one of the businessmen asked if Reub had actually witnessed this.

"I didn't get to see him land," he explained, "because when he was halfway down, he saw me and turned right around and went back up."

Like most good yarn-spinners, Reub appreciated good high-quality lies as well. He passed on one particularly entertaining one from Jack Horton of the United States Forest service.

It seems Jack was in charge of a guided Forest Service tour, and a physician from Philadelphia was in the group. The physician, a total greenhorn who'd never been out of an urban setting, was a problem almost immediately. He demanded a horse that bounced less, then a saddle that wasn't so hard; he complained bitterly about the dust, wanting to be moved up to the front of the line; and he griped about the cold lunch that was served at noon.

That night, Jack found a nice grassy spot for the riders to unroll their sleeping bags. The doctor tried first one spot, then another; one was too rocky, another too steep, a third too close to a guy he didn't like. Finally he disappeared with the sleeping bag he'd been issued.

The next morning, he appeared by the fire, bleary-eyed, as Jack was cooking pancakes.

"Good morning, doctor," Jack said. "How did you sleep?"

"Hardly at all," the physician grumbled. "I guess it was that sleeping bag. I almost smothered to death and my feet froze."

Reub's most famous story is one which he presents in his book as a true story, and you can make of that claim what you will.

It seems he bought a ranch that had been a successful, going concern, but had been vacant for a while. During that time, the rats had moved in, and the place was utterly infested with them. Reub could not seem to get rid of them.

"I tried poisoning, shooting, trapping - all the things I knew about," he wrote. "The rats outsmarted me on every turn."

He said if Reub would just catch a full-grown rat, whitewash him and turn him loose again, the other rats would think he was a ghost and would all leave.

"That didn't seem to be the sort of thing a person could believe with all his heart," Reub added dryly, "but the remedy was cheap and I was desperate."

So Reub caught one of the rats, a nice big one, and alerted the neighbor. They brought the rat out to the road for the whitewashing, and soon a large group was assembled there: Reub and his two hired hands, the neighbor and his hired hands, and "a couple other amateur rat specialists."

"At that point, several technical points arose," Reub wrote. "Such questions came up as whether the whitewash should go on with the grain of the hair, thereby getting a smooth, slick job, or whether against the grain, thereby being more thorough, but leaving him rough and unattractive. Should we let the whitewash dry before turning him loose? Should we mix white of egg, flour paste, or anything in the whitewash to make it sticky?"

While they were all there clustered around the rat and struggling with these scientific questions, a big, fancy red car pulled up to the group. The driver stopped and stuck his head out the window, trying to get a glimpse of what the fuss was about.

"What in hell is going on here?" he asked. 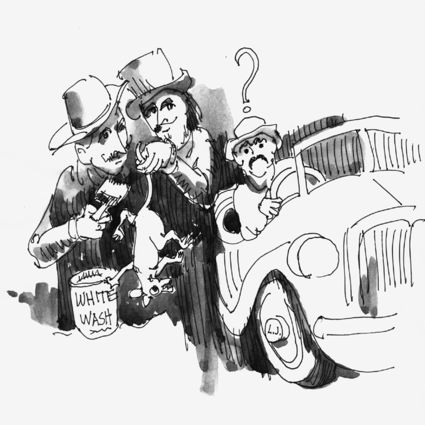 What's the best way to put whitewash on a rat?

The stranger said nothing more, and when Reub looked up again he was racing off into the distance ... most likely, just as fast as his fancy red car would go.