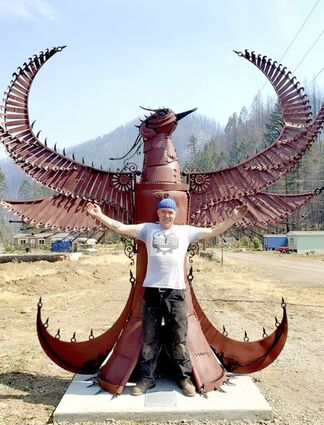 From a project initially nicknamed "Beauty from Ashes," Eugene artist Jud Turner turned to the legend of the Phoenix, a mythical bird reborn from fire, as the inspiration for his "Viribus" installation in Blue River.

"I felt it was a great honor to be asked, and I have always believed that public art has the power to bring people together, and this seemed like a really good opportunity for that potential," explains Jud Turner, a Eugene sculptor invited last winter to create a sculpture for the McKenzie River community by a coalition of groups - McKenzie River Development Council, Love for Lane County and the Arts and Business Alliance of Eugene.

Working with people who live in Blue River, Turner says residents came forward with donated metal salvaged from their homes and business sites. "I collected things like pipes, irrigation barrels (the wing feathers and body are cut from these), patio furniture with decorative patterns, and old tools/hardware."

For example, the beak was once a large barn door hinge - two elongated triangles that Turner bent in half longways to create the shape.

Some of the internal structural components of the sculpture needed to be made from new steel, because steel that has been exposed to intense heat loses some of it's tensile strength, and wouldn't be as able to support the weight of the sculpture. However, 90% of what people see is from materials salvaged from the fire damage.

The total time to create the sculpture was around 200 hours, and spread out over several months. "As I progressed, I would share photos with the committee to insure people were feeling good about the design and direction I was taking, and they were enthusiastic," Turner recalls. 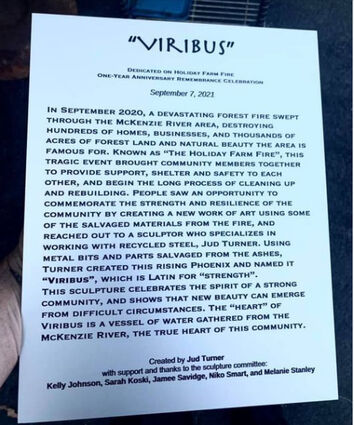 He took those items back to his metal studio in Eugene, and began to work to see what fit together to become the framework for his work named "Viribus" - which is Latin for "Strength." Turner chose the name, "To reflect the resilience and strength he observed as the local residents, "Came together to clean up, rebuild, and support each other."

Since the sculpture was installed last Thursday, it has received very positive attention from locals, and on social media.

"I have had many people contact me and say that it moves them to tears, which is a huge honor as an artist, and truly shows me the power and potential that public art has to create meaning and inspiration," Turners says. "It is my hope that it will remain a symbol of the community spirit and strength for many years to come, and that the area around it will rise in new beauty as the landscape regenerates and homes and businesses are rebuilt stronger than ever."