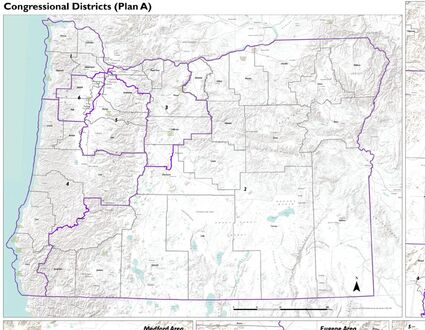 The Oregon Legislature released two different maps, wiuth Plan A above, for how to draw its six congressional districts.

After receiving detailed census data in August, lawmakers released their recommended redistricting maps on September 3rd. They began holding virtual public meetings in the state’s five current Congressional districts last Wednesday, with two scheduled for each district through Monday., followed by a statewide meeting that day.

Precious Edmonds, advocacy director for We Draw Oregon, pointed out people of color have seen their power diluted in the redistricting process in the past. Her group worked to make public meetings as accessible as possible.

On the congressional level, Oregon received an extra seat, making the redistricting process especially important for power on the national level. Plans have also been released for the lines of the state’s 30 Senate seats and 60 House seats. Edmonds emphasized drawing a line through communities can dilute their power.

“We advocate for, whenever possible, keeping communities as whole as possible to preserve that right,” Edmonds explained.

Edmonds noted keeping communities whole also makes it more likely their representative will look like them. She added her organization already has identified some districts that could dilute power for Black, Indigenous and Latinx communities.

The Legislature aims to have new district maps completed by September 27th. More information at: alturl.com/inhyn