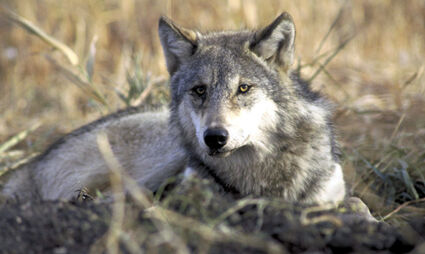 The U.S. Fish and Wildlife Service, after completing the initial review of two petitions, says listing gray wolves again in the western U.S. under the Endangered Species Act may be warranted due to potential increases in human-caused mortality under new hunting and trapping rules in Idaho and Montana approved after wolves were de-listed.

The decision comes in response to emergency petitions from the Center for Biological Diversity, the Humane Society of the United States, Humane Society Legislative Fund and Sierra Club.

Wolves lost their federal protections when the Trump administration finalized a national delisting rule in January. Since then, management of wolves has fallen to state wildlife agencies.

"The Service finds that the petitions present substantial, credible information indicating that a listing action may be warranted and will initiate a comprehensive status review of the gray wolf in the western U.S.," said the agency.

On June 1, 2021, the Service received a petition (dated May 26, 2021) to list the gray wolf Northern Rocky Mountain Distinct Population Segment (DPS) or a new western U.S. DPS as a threatened or endangered species under the ESA. The Service received a second, similar petition on July 29, 2021. The Federal Register notice will serve as the 90-day finding for both petitions.

Under the ESA, a DPS is a portion of a species' or subspecies' population or range and is described geographically instead of biologic ally. The first petition proposes listing a Northern Rocky Mountain DPS consisting of Montana, Idaho, Wyoming, the eastern one-third of Washington and Oregon, and a small portion of north-central Utah. Both petitions also propose some alternative Western U.S. DPS to include all, or part, of the Northern Rocky Mountain DPS states with the addition of California, Colorado, Nevada, and in one petition, northern Arizona.

Substantial 90-day findings require only that the petitioner provide information that the proposed action may be warranted. The next steps for the Service include in-depth status reviews and analyses using the best available science and information to arrive at a 12-month finding on whether listing is warranted. If so, listing a species is done through a separate rulemaking process, with public notice and comment.

The 90-day finding can be found here.

Numerous Tribal organizations are also calling for the emergency relisting of gray wolves and for the Biden administration to honor treaty and trust obligations that require consultation with the Tribes on protection and management of gray wolves.

"Given the immediate threat facing the gray wolf as the result of states enacting anti-wolf policies that present a real potential of decimating wolf populations, we write to desperately urge you to immediately act upon the emergency petition filed on May 26, 2021, to relist the gray wolf as endangered or threatened under the Endangered Species Act (ESA)," said a letter from the tribal organizations to the Interior Department. "Just as important, we also call on you to exercise existing authority to list the gray wolf as such on an emergency basis. Emergency listing is a temporary measure that ensures immediate protection and expires 240 days following the publication date. This 240-day pause will allow the federal government to engage in proper and meaningful consultation with tribes."

"I'm hopeful that wolves will eventually get the protection they deserve, but the Fish and Wildlife Service should have stopped the wolf-killing now," said Andrea Zaccardi, a senior attorney at the Center for Biological Diversity. "Anti-wolf policies in Idaho and Montana could wipe out wolves and erase decades of wolf recovery. We're glad that federal officials have started a review, but wolves are under the gun now so they need protection right away."

Idaho's new law has the potential to eliminate up to 90% of the state's wolf population. It calls for private contractors to kill wolves, allows hunters and trappers to kill an unlimited number of wolves, and permits trapping year-round on private lands across the state.

Montana's new laws permit the use of strangulation snares, night hunting and bait to hunt and trap wolves. Hunters and trappers can kill up to 10 wolves each and can be reimbursed for their expenses killing wolves through a new bounty program.