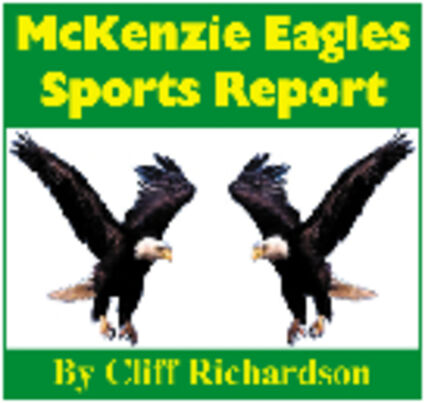 McKenzie High will host its first Football Homecoming Celebration and Game since the 2020 Holiday Farm Fire and the Covid virus combined to throw an interception in all that's normal and good. To be honest, the McKenzie High Athletic Department, along with all in our community that is McKenzie, took a nasty hit. The iconic football stadium and concession stand on Wade Thomas Field, both built by the long-departed McKenzie Booster Club in the early 70's, were destroyed by the Fire and subsequently cleaned up this past summer. The football scoreboard, also donated to McKenzie by the Booster Club, needs to be replaced. Still, standing tall and now easily visible from McKenzie Highway is the southern goal post. A hundred yards northwest, stands the yellow twin goal post (both structures were likewise built and donated by the McKenzie Booster Club and associated businesses/volunteers).

McKenzie High did not see enough athlete numbers turn out for Varsity football and volleyball practices this Fall, which forced the Eagles to cancel both Mt. West League schedules. Meantime, over on the Siuslaw River, Mapleton High School has experienced its own issues with athlete numbers. The Sailors, like the Eagles, had to cancel Varsity football. No Friday night-lights in Mapleton this Fall. But that's where this story takes a interesting and unique turn.

Together, the two Athletic Directors at McKenzie and Mapleton, Fred Heins and Carrie Dean, respectively, dusted off their pads, and devised a splendid game plan that ensures Homecoming Activities for both schools will go forward, albeit, not in the traditional sense. And that is where this story gets really cool!

McKenzie loaded up a co-ed team of students last Friday, October 8, traveled to Mapleton and engaged a Sailor co-ed team in a game of flag football. Under the lights and a Mapleton Homecoming. (Unfortunately, the game was called after 2 quarters due to a medical emergency to a fan).

This Friday, Mapleton returns the favor, travels to Finn Rock and Wade Thomas Field to play another game of Homecoming Flag Football. Complete with spectators (you all are welcome to freely attend) and a Homecoming Court and Coronation ceremony. Hats and helmets off to these two schools for getting this right, just when something right needs to happen for these schools and their communities.

Unfortunately, due to the looming virus concerns, the proposed Homecoming Dances will not happen, but the week long hoopla, games and class competitions will. And that's awesome! Memories are being made and stories will be shared years from now.

Here's a challenge McKenzie Folks. Let's fill those sidelines this Friday with spectators and cheers. For both teams! When is the last time you saw a flag football game? For me, I think it was back in 1971, when my Dorm team (we were called the Nads, proudly short for, well you might guess!) finished second in the All University Flag Football Championships held on the old Parker Stadium Field at Oregon State University.

Under the Lights! The game this Friday kicks off at 7:00 pm. You might want to show up a bit early, to beat the crowd and find a great spot to set up your lawn chairs.