In the First World War, Allies flew planes made of Oregon spruce 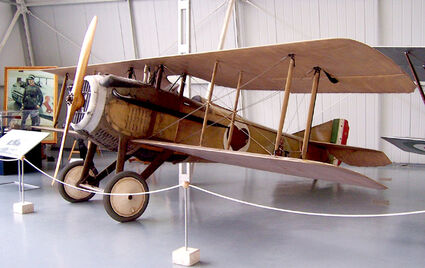 The last year of the First World War saw an explosion in Allied aircraft. The forces of Imperial Germany put up the best fight they could, and fielded probably the best aircraft of the war - the Fokker D.VII, which famously could hang on its propeller - but the few they managed to make were overwhelmed by swarms of the latest SPADs, Nieuports and DeHavilands, which were close to equal quality and far more numerous.

The fact is, after Oregon got involved in the war, the German air force didn't have a chance.

At least one out of every three Allied fighter planes built during 1918 was made with primarily Oregon spruce - spruce that just months before had been growing in the hills of Lincoln County, probably close by Yaquina Bay.

When airplanes were first created, they were essentially giant box kites with crude gasoline engines on board, made with wood and fabric. As with any kite, weight was a big issue, so the wood used in these early machines had to be strong and light.

After experimenting with lots of different types, early aviators quickly figured out there was one type of wood that was head and shoulders above the rest: Old-growth spruce. And of all the different types of spruces, the variety known as Sitka spruce was among the very best.

It was certainly the biggest. Sitka spruce trees can get over 200 feet tall, with trunks over 10 feet in diameter. One 500-year-old Sitka spruce tree can provide enough straight, clear spruce to build about 150 Nieuport 28s. The wood is extremely rigid and lightweight. Furthermore, as it turned out, it wouldn't shatter when hit with a rifle bullet.

By the time the war had broken out in Europe, the belligerents all knew what to make airplanes out of. Germany, with access to plenty of Norway spruce in its northern reaches, was in the best shape. Not much spruce grows in France, and even less is found in Britain.

But the Allies, as it turns out, had a secret weapon ... the central coast of Oregon.

Sitka spruce grows all along the West Coast of North America, from northern California all the way up to - well, Sitka, Alaska. But the biggest, thickest stands of the most massive Sitka spruces were found in Washington's Clallum County, and Oregon's Lincoln County. They still are.

As soon as the war broke out, prices for clear spruce started shooting up. British and French buyers were lined up to snap up as much of the golden wood as they could get their hands on, to be slipped across the sea in convoys past German U-boats and turned into airplanes: spindly British B.E. 2 deathtraps and Bristol Scouts, and agile French Nieuport 11s. Even before the war broke out, a hefty percentage of Allied aircraft could trace their origins back to a deep forest somewhere near the central Oregon coast.

There was always far more demand than supply, though, and spruce production was not rising very quickly in response. So when the U.S. stepped into the conflict, the government decided it was time to make a more serious effort to get the wood out.

The War Department sent Col. Brice Disque into the timber country, with an eye to seeing how production might be boosted, and he soon learned that mill owners were locked in a struggle with the Industrial Workers of the World union. After talking the situation over with everyone involved, Disque concluded that nothing would change unless the Army took over.

An army of loggers, literally

So it did. The War Department promptly formed the Aircraft Production Board, which immediately got busy acquiring as much spruce-bearing timberland as it possibly could. Then a detachment of soldiers was issued crosscut saws and deployed to the forests east of Newport.

This intervention was resented by almost everyone in the field - the mill owners feeling like they'd been robbed, the union feeling their strike had been broken. But, as Disque frequently pointed out, there was a war on, and everyone just had to suck it up. And so, with few exceptions, they did.

Soon the soldier-loggers and other crews were sending rail car after rail car back northeast, loaded with spruce logs. The logs were processed at a massive sawmill in Vancouver, Wash., and sent off to aircraft factories from there.

But it made a lot more sense to have the sawmill where the trees were, so they could be handled less. And so the government started looking around for suitable places to build a massive sawmill.

The Coast Range town of Toledo turned out to be perfect. Toledo sits on the Yaquina River, just inland from the sea, close to the upstream limit of the estuary. In 1917 it was a small timber town with several hundred people, most of whom worked at one of the three sawmills on its outskirts.

Toledo is situated on a wide bend in the Yaquina River, and there's a broad, low 60-acre island of reclaimed tidal flats in the middle of it. It was on this island that the War Department decided to build its mega-mill.

Soon soldiers and laborers were hard at work on a massive, state-of-the-art sawmill, a million-dollar mill. But before they could finish, the Germans surprised everyone by abruptly losing the war.

That put the brakes on the sawmill project fast. After the end of hostilities, Americans were in no mood to continue spending money building warplanes that they thought they'd never again need. Congress, feeling that President Wilson had been altogether too eager to get the government into businesses, pulled back sharply on the reins.

So the War Department put the whole works up for sale - the mammoth almost-finished sawmill, a short railroad line, timberlands with nearly a million board feet of standing timber, everything. 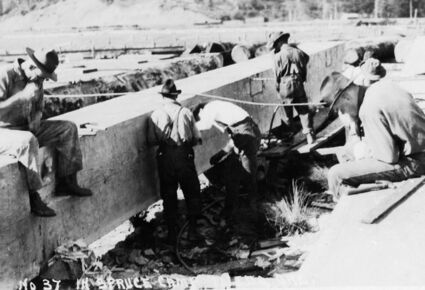 U.S. Army "soldier-loggers" take a break around a massive rough-sawn spruce timber in 1918.

A year or so later, a group of investors headed by C. Dean Johnson and his son, C. Dean Johnson II, came forward with a $2 million offer, which has to have been the deal of the decade. By the early 1920s, the Pacific Spruce Co. was a thriving concern, with roughly 1,000 employees, and Toledo was, for all practical purposes, a company town.

It was also, for many years after that, the spruce capital of the world - and the spawning grounds of some of the world's best aircraft, even well into World War II.