Eight new homes could be available around first of the year 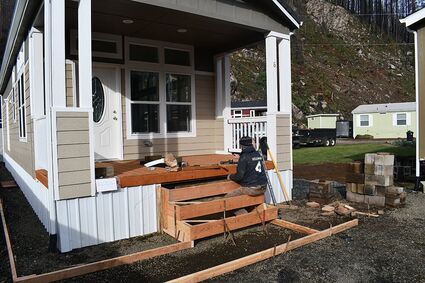 Workers are putting final touches on a complete reconstruction of the Blazing Stump Mobile Home Park, which was lost when the Holiday Farm Fire swept through the area.

VIDA: Over a half-dozen, new homes near the Goodpasture Covered Bridge have been generating a lot of interest, along with false assumptions. "The majority of people who stop in think we're a sales lot," says Steve Shefcheck with a laugh. Instead, the eight factory-fresh manufactured homes he and his wife, Diana, bought are key to the couple's plans to restore some rental options to the McKenzie River area.

From the time he was 21 until his mid-40's, Steve owned an insurance agency in Springfield. Fifteen years ago he sold that business and bought the Blazing Stump Mobile Home Park as a backup source of income. Hidden behind a tree line, the 1.6-acre parcel had three homes on it. Two were owner-occupied and another was abandoned. As time went on, brought in five more used 1990's homes, purchased the others, and operated the park as a landlord.

All seemed to be well until September of 2020 when the structures were part of more than 470 destroyed by the Holiday Farm Fire. The Shefchecks have lived on Mountain View Lane for 24 years. The fire hit there too, taking out an outbuilding that was stuffed with a lifetime's accumulation of all their rental materials and tools.

Because of evacuation orders, they weren't able to drive to the site to check on the eight families that lived there or determine if the trailers had burned. Their only connection was through posts on the McKenzie Residents Wildfire Group's Facebook page, where they learned people evacuated and all the homes were gone."

"The first time around I wanted to do it," Steve says of how he felt back in 2006 when they bought the property. After the fire, he had to make a decision. "Now I wanted to do it, but not so much." Bolstering the decision to go forward was the realization that, "This was one of the better investments I've ever made." Like other fire victims, the Shefchecks say the community has been supportive. "We would have not wanted to take on the rebuild and couldn't have done it alone," Steve says, "without the help of the Hileman family and the skilled help of Kevin Hileman."

These days he's spending a lot of time on the site clearing debris, planting more than 50 Cypress trees along the frontage area, and overseeing workers. "I thought I was going to be semi-retired," Steve says. "Now I've gone back to work harder than I have in my life." 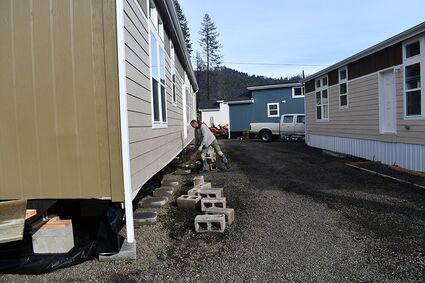 People could soon see the results of those efforts. On January 5th of 2021, they ordered all new homes from the manufacturer. Seven single wides and one double-wide were delivered to the property on October 4th. All include stackable washer-dryers, built-in microwaves, and mini-split heat pump/air conditioners. Barring anything unforeseen, the Shefchecks should begin accepting applications in another month, with the first tenants starting to move in during January. Prices will range from $1,100 to $1,400 per month. Along with a roof over their heads, renters will receive water, garbage removal, and yard care.

At times Steve said it's felt like he'd started a never-ending project. Like others who are building back, he agrees that the biggest thing to overcome with the whole project had been dealing with Lane County's building permits and regulations. Even so, he didn't find the process overwhelming and says he found the best ways to move forward include, "Knowing who to talk to, and not going away."

People looking for more information can text Steve at 541-729-0313 or email at:[email protected]