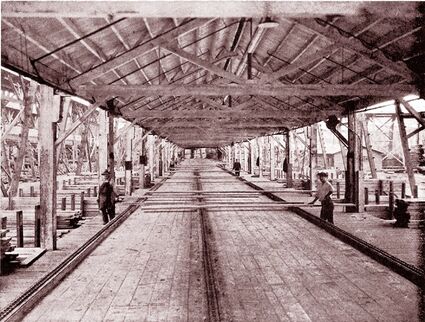 The "green chain" at Pacific Spruce as it appeared in 1924, the year before its staffing became the bone of contention between the mill owner and the city.

In the summer of 1925, an event took place in the Coast Range town of Toledo that would spark widespread outrage and an international incident. The event was, for all practical purposes, a race riot: A mob of hundreds of angry white people attacking and evicting a small group of Japanese workers.

From a distance, the story looks like an ugly episode of provincial racists behaving badly and subsequently being punished by the more enlightened. And that's more or less an accurate assessment - but it's incomplete.

Spoiler alert: The sawmill owner was the only winner here. Which is a little outrageous, considering that he did far more than anyone else to set the whole thing up.

In the early 1920s, the Pacific Spruce Company sawmill, owned by C. Dean Johnson, utterly dominated the town of Toledo. Thanks to this one mega-mill, the town's population had grown from a few hundred to a few thousand in just a few years. Johnson had bought the mill for pennies on the dollar from the U.S. government after it got out of the spruce-milling business when the war ended.

Johnson lived in Portland, but his son, C. Dean Johnson II, managed the mill and lived in Toledo.

Trouble on the green chain

The trouble started when the Johnsons started toying with the idea of hiring a contract crew of Japanese workers to "pull green chain." The green chain was a conundrum for lumber manufacturers; it's the most grueling work in the mill, and yet under the system they were using in 1925 it requires a high level of skill and judgment. Workers had to move fast to grab pieces of finished lumber off the conveyer chain as they move by and sort them into piles according to quality.

Traditionally, new hires would start out pulling green chain, and after a year or two move up into a less demanding, more prestigious job. The trouble was, that left the least skilled workers in the mill doing one of the more important jobs, and the quality of the mill's output was suffering.

The Johnsons thought the solution would be to establish a whole new class of workers in Toledo - workers who would just pull green chain, who would be effectively ineligible for promotion to more desirable jobs, and who wouldn't be so troublesome. Naturally, that entailed a segregated colony of racially different people.

In the mid-1920s, it was Japanese workers who were available and willing to work under such conditions. Fifty years earlier it would have been Chinese; a century earlier, Irish, or African slaves; today it would be Central Americans.

The battle lines are drawn: City vs. sawmill

Word of the scheme leaked out early in 1925, and it was not well received. City business leaders asked for a meeting with the younger Johnson, who told them the company was just hiring a dozen or so Japanese workers to plug a gap on the green chain; nobody's job was going to be replaced, and there was nothing to worry about.

But they still worried. And following the meeting, there was a big community meeting, after which the city issued a written protest against bringing in "foreign labor."

This seems to have made the Johnsons mad. Immediately they moved forward with plans to hire not a dozen, but about 60 Japanese workers through a labor contractor in Portland; to house them in a separate cantonment on company property; and to replace two shifts of green-chain workers with them.

To the townsfolk, it looked like a confirmation of their worst fears: that the Japanese workers would be a beachhead; their economic power was their ability to do better-quality work than the locals, for cheaper. They'd be established in Toledo as a separate colony, not mixing with the town at all, not contributing to the economy in any way, and their numbers would grow until the Johnsons' sawmill was a closed system with a town, wasting away and demoralized, on its outskirts. Essentially, they feared a situation kind of like the one satirized in Roald Dahl's "Charlie and the Chocolate Factory" after Willy Wonka brought in the colony of unpaid-but-always-happy Oompa-Loompas.

A setback for the sawmill

But meanwhile, news of the community's opposition had come to the attention of the labor contractor in Portland, and he was not about to send his crew into a dangerous situation to become pawns in a labor struggle. He informed the elder Johnson that the deal was off.

Johnson's response was to travel to Toledo, call another town meeting, and bully the leaders of the town into rescinding their protest. He insisted that they vote out loud, one by one, so that the only way to vote against it was to publicly identify oneself as an enemy of the most powerful man in Toledo.

He got what he wanted, and the deal was back on. From his office in the Northwest Bank Building in Portland, Johnson hastened to reassure the labor contractor that everything was now just fine, and his crew would be welcomed in Toledo.

But as the old saying goes, "a man convinced against his will is of the same opinion still." So when that crew of Japanese workers showed up in Toledo, they had no idea that they were about to become pawns in a power struggle between the two great economic forces of the little timber town.

When the Japanese workers arrived, they'd barely settled in before a huge crowd formed and moved in on them. The crowd - it was not yet a mob, but it would be shortly - planned to make a show of force and "escort" the Japanese colony out of town.

But the crowd was met at the property line by both Johnsons and some of their men, all freshly deputized old-west style - and they were ready for a fight. Not a fight for the civil rights of the Japanese workers, but a fight to defend their property from what they saw as an outrageous act of meddling in someone else's business.

The members of this crowd don't seem to have been planning to riot, and none of them had brought weapons. But when their leader asked to speak to the foreman of the Japanese crew, Johnson shoved him in the chest and told him to get off the property. This transformed the mass of Toledo citizens into an angry mob, which then stormed the place. People got punched, knocked down. A gun, taken from one of the mill defenders, was waved around a little, but was soon tossed into the river.

In a matter of hours, the Japanese workers were "escorted" to waiting cars and trucks and taken to Corvallis. Some of the townspeople passed a hat to give them some money, but the workers - by now getting over the shock of their treatment and starting to get angry - wouldn't hear of it. "We don't want that kind of money," worker Tamakichi Ogura told the city marshal, when he tried to give it to him.

In the aftermath, no charges were filed against anyone. But five of the Japanese workers sued for violations of civil rights, the first case of its kind, and won a $2,500 judgment against five of the most active participants in the episode. 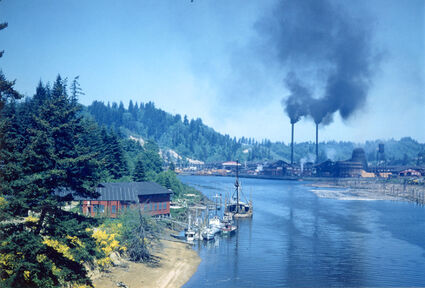 Mill as it looked in 1952, a year after it had been sold to Georgia-Pacific.

As for the Johnsons' mill, after an internal purge of all employees connected with the riot, it carried on as before. In 1951, it was sold to Georgia-Pacific.

The story of the treatment of the Japanese workers remains as a lingering and embarrassing memory, and a vivid reminder of how much has changed in Oregon since the 1920s - and also, an uncomfortable reminder of a few things that have not.