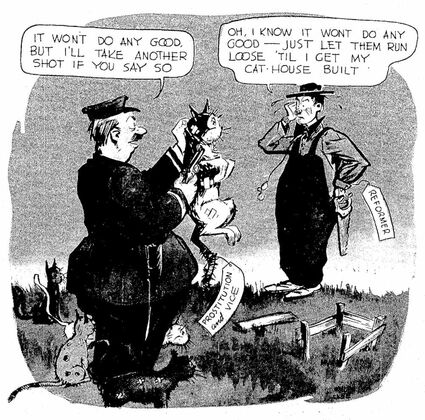 This cartoon ran with Herbert Lundy's article in the Portland Morning Oregonian on April 2, 1939, illustrating Portland social reformers' dilemma in trying to stamp out prostitution.

One November evening in 1885, Portland residents walking past a row of tiny houses at Third and Yamhill heard screams coming from one of them.

Bursting in, they found the mutilated and lifeless remains of a 33-year-old French beauty known as Emma Merlotin. Someone had killed her brutally with a hatchet and then slipped away into the night.

Emma, whose real name was Anna DeCoz, was a well-known "nymph du pave," as the Evening Telegram phrased it - basically, a courtesan. Her clientele included some of the city's most prominent bigwigs, and it was widely rumored at the time that her death had come at the hands of one of them - although 11 years later, a Canadian drifter confessed to the crime.

Until this time, most Portland citizens hadn't given much thought to the city's prostitutes. Everyone knew they were there, of course, and their trade had been illegal since the early 1870s - outlawed, the rumor was, at the behest of a city councilor who had picked up a social disease from a bordello girl.

But in the wake of the Merlotin case, the plight of the poor "fallen woman" and her "life of shame" was a topic that was coming up in conversation - and in Sunday sermons.

It was all just talk until the early 1890s, nearly a full decade after Emma's death, when a pastor named Charles Locke came to Portland from Pittsburgh. Locke maintained that if Portland wanted the ladies of the evening to give up their profession, they had to be offered some kind of alternative. They couldn't be simply run out of town. He urged Portland to build a "home for wayward girls and fallen women," a place of refuge for prostitutes who wanted out and for teen girls at risk of being tempted into the business.

This idea met with immediate approval, and Portland's church folks got busy immediately. By 1895, the project was well under way. With adorably earnest naïveté, they gave it a somewhat unfortunate name: "The Open Door."

Eager citizens got busy supplying everything The Open Door might need. In fact, some of those citizens seemed a little too eager. One fellow, Captain Richard Williams, offered the use of a building free of charge; the coordinators turned down his offer, saying the building was too large to be suitable, but their real reason may have had more to do with the captain's reputation: He was known around town as "Slippery Dick."

Fortunately, offers from less disreputable citizens came thick and fast - donations of kitchen equipment, furniture, linens. Soon The Open Door had a location, at 25 North Fifth Street. A house matron, Mrs. Lucy Morgan, was hired and moved in. And by late spring, The Open Door was ready to receive its first Fallen Woman.

Now all was in readiness for Phase 2 of the reformers' plan: A city-wide crackdown on dens of iniquity.

To the great amusement of the jaded newshounds at the Oregonian and the Telegram, a reluctant constabulary was now sent forth to collect suspected prostitutes and bring them to justice. Time and again, the horse-drawn police wagon rumbled forth and returned creaking under a heavy burden of unrepentant Fallen Womanhood.

Interestingly, the women arrested were the city's most upscale entrepreneuses. Della Burris and Lida Fanshaw, CEOs of the most exclusive and elegant parlor houses in the city, were among the first arrested. Dozens of their employees and colleagues were nicked too.

The cops had been, if we can believe Holbrook, somewhat reluctant and skeptical about the whole thing at first. But once they started arresting the ladies, they seem to have had a change of heart. Portland police officers suddenly threw themselves into the effort. Soon the city's police-court docket was full of suspected bad girls.

The first to face prosecution was Della Burris, up on a charge of Operating a Bawdy House. Della coolly pleaded Not Guilty; the prosecution asserted that everybody KNEW she was running a brothel; and the judge promptly dismissed the case.

"Common fame and general reputation are not sufficient evidence to convict anyone of keeping a bawdy house," he remarked.

It turned out the cops, in bringing the ladies in, had simply been arresting them, collecting no evidence. The district attorney was simply filing charges against them, making no investigations. Without evidence, there could be no convictions. And this happened again and again.

The most likely explanation for this uncharacteristically cavalier attitude toward law enforcement was articulated very neatly by the editor of the Morning Oregonian on its editorial page on April 10:

"The District Attorney gets $5 for every arrest; $7.50 for trial; and $15 for convictions," the editor wrote tartly. "In each case, having taken pains to draw all the indictments separately, if there are no convictions, he will make from $500 to $600. The police justices and constables make about $12 out of each case, or as much more, and the county foots the bill. This is the total visible profit of the moral crusade so far - about $1,200 diverted from the pockets of taxpayers to those of officials."

In other words, some clever devil had figured out that the authorities were essentially working on commission. Reformers having demanded action from them, they'd realized that such pressure was like a license to print money - and who were they to refuse such a clear call to action from the citizenry, anyway?

But the law enforcement pressure looked like it was having its intended effect on Portland's ladies of the evening. One by one, the Rose City's Roxannes wandered into The Open Door and settled in, apparently ready to put away their makeup and embrace the clean and sober life. By late June, The Open Door was starting to look like a big success.

Then the logging camps shut down for the traditional "Fourth of July Drunk," and Portland was suddenly flooded with strapping young lads smelling of sawdust and pitch and whiskey, freshly paid and ready to "blow 'er in." And a funny thing started happening: The Wayward Women started melting away from The Open Door. They'd go out shopping and just never come back. 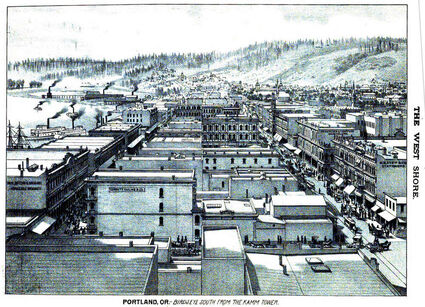 : Downtown Portland as seen looking south from the tower of the Kamm Building, located on Pine Street between Front and First, in 1886. The murder of Emma Merlottin occurred six blocks down and two blocks to the right of where the artist was standing when this image was made.

It turned out the opening of The Open Door had just happened to coincide precisely with the least lucrative time of the year for Portland prostitutes - the early summer season, when the loggers were all hard at work in the woods. They'd been happy to check in for a few weeks and enjoy free room and board. But now the boys were back in town, and it was time to go get some of their money.

Soon Mrs. Lucy Morgan was alone in the big empty house, listening to roaring-drunk loggers and Fallen Women cavorting around in the streets outside.

A few weeks later, the demoralized reformers gave up on the whole thing.