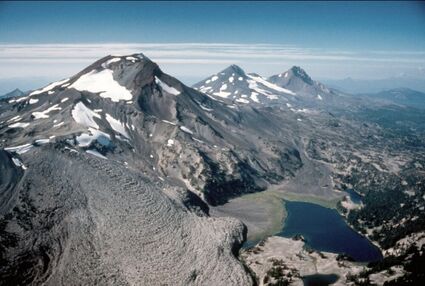 South, Middle, and North Sister mountains (viewed from the south), with the Newberry lava flow (to the left) that is estimated to have occurred about 2,200 years ago.

SOUTH SISTER: The U.S. Geological Survey has detected movement again at an uplift area on the South Sister, known as the "Bulge." Satellite data from June of 2020 through August of 2021 showed uplift grew by 0.85 inches. A number of small earthquakes have also been recorded in the 12 mile wide area which located about 3 miles west of the relatively dormant South Sister volcano.

The three aligned stratovolcanoes of North, Middle, and South Sister are closely spaced, but they display very little family resemblance.

The area gained its nickname about 25 years ago when the upward growth was first recorded. Between 1995 and 2020, scientists using satellite imagery and GPS instrumentation reported the area rose approximately 12 inches.

Researchers believe the activity can be related to small volumes of magma accumulating roughly 4 miles below ground.

Cascades Volcano Observatory geophysicists say that although episodes of increased uplift have been observed in the area before, the volcano's alert level and color code remain at "Normal/Green."