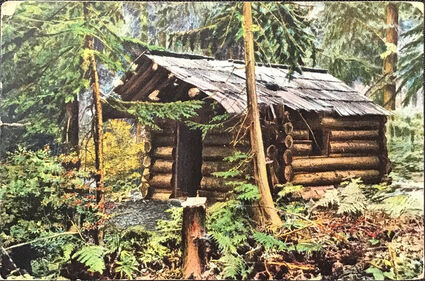 Postcard image of a miner's cabin near Spokane, in the Cascade Mountains, published by M. Rieder of Los Angeles. This postcard was postmarked March 26, 1908.

Lost or abandoned cabins pop up so often in legends of missing gold mines and buried treasure that they are almost a cliché.

Most of them follow a clear pattern or formula - in fact, all lost-treasure stories do: The seeker stumbles across the treasure while doing something else; he is called away for some reason; and he can never find his way back, despite devoting years to fruitless searching.

There may not be a more faithful example of that pattern than the story of the lost cabin of Steamboat Mountain.

The Steamboat Mountain Lost Cabin Gold Mine story dates back to 1870, when two prominent citizens of Central Point, Constantine Magruder and Doc Lee, took some time off to do some deer hunting near the Applegate River in Jackson County.

The two of them made camp near a small spring on the side of Steamboat Mountain, and for a couple days they each rode out separately in the morning to hunt, returning to their camp at night.

On the third day, Magruder came across an old abandoned log cabin, with a partly collapsed roof, tucked away in a grove of heavy trees in a spot that appeared to have been chosen for concealment. It had been abandoned for years, maybe decades; a tree was growing up through its floor where the roof had fallen in.

Magruder dismounted to investigate. It looked as if it had been abandoned in a hurry - by someone who had come to a bad end; there was a gold pan on the floor with a few nuggets in it, near a miner's pick.

Magruder pocketed the nuggets, looked around a little more, and got back on his horse. It was late, and he was a long way from camp. Hurriedly he made his way back, arriving just in time before the twilight faded completely into blackness, and told Dr. Lee about his discovery.

Magruder and Lee decided to run into town the next day to restock their provisions before investigating; they were running low, and they wanted to have as much time as possible to hunt for the diggings, which must be near the cabin.

Back in Central Point, they told a blacksmith, Bill Hays, about their find. Hays got very excited. Unlike the other two, he was familiar with the story of "Old Set-Em-Up," the prospector from Yreka who had a secret cabin and gold mine up north in Oregon. "Old Set-Em-Up," according to the story, stayed in his secret cabin working his secret mine all summer in 1851 and 1852, returned to Yreka for the winter loaded with gold, and basically kept the whole town in drinks all winter long. His nickname was derived from the shout of "Set 'em up for the house!" with which he habitually announced his arrival at the saloon each night.

Then, in 1853, Old Set-Em-Up vanished, touching off several decades of prospectors scouring through the woods of Southern Oregon looking for his cabin and mine.

It was Old Set-Em-Up's cabin that Hay thought his friends might have stumbled across.

Hay joined Magruder and Lee on their return to their camp. But in typical "Lost Gold Story" style, they were unable to figure out where their camp had been. And without their old camp as a starting point, Magruder had no idea how to find the old cabin.

The three of them hunted for several days without success. They came back several more times to search, over the next five years; but they never did find the old cabin again.

The other Lost Cabin story involves a miner who decided that, rather than wandering all over the backcountry digging holes and hoping to find gold in them, he'd dig someplace where he KNEW he'd find gold:

In the strongbox chained to a Wells Fargo & Co. stagecoach.

This miner - whose name I have not been able to learn - was in Boise City when he somehow learned that a particular stagecoach would be transporting a big haul of cash and gold along a trail that ran through country he knew well. The temptation was apparently just too much for him.

So a few days before the run, he saddled up, loaded his pack horse with provisions and equipment as if going into the mountains to prospect, and told everyone he knew that he was headed into the wild country around Silver City to look for gold.

A few miles outside town, he turned around and headed back to the stage road, to a spot at the base of a steep climb where he knew he could stop the stage.

The coach got there just around dusk, and the miner got the drop on the driver easily. He tied him up securely and gagged him, tied the team to a tree, and then used his miner's pick to "prospect" in the strongbox.

The robber loaded down his pack horse with 100 pounds of gold, stuffed all the banknotes in his pockets, and slipped away, leaving the driver helpless.

The next day, the coach having failed to arrive, riders went out to search, and easily found the tied-up driver. But they were almost too late. It was late afternoon on a very hot day, and he had been lying in the scorching sun all day. He very nearly died, and was too delirious to say anything for several days as he recovered.

By this time, the robber was in The Dalles, prospecting around a bit to maintain his cover, and keeping an eye on the Boise newspapers whenever he could. In this way, he learned that a partner of his, who had set out on a prospecting trip a day or two after he had, had been arrested for the robbery. Then the partner was convicted and sentenced to eight years for it.

Conscience-stricken, the robber nearly decided to give himself up; but instead, he went into the mountains and built himself a little cabin and lived in it as a hermit. The stolen gold he cached under a stump nearby.

After half a dozen or so years of total solitude, the robber emerged, and traveled back to Boise City. There he found that no one remembered him or suspected him of anything, and his partner's prison term was nearly up.

But before the robber could do anything else, he got very sick. On his very deathbed, he wrote out a confession, exonerating his partner and giving detailed directions for finding the stump under which he'd stashed the stolen gold.

The problem was, the directions started from the cabin door; and he didn't mention where the cabin was. All anyone knew was that it was somewhere in the mountains of northwest Oregon.

This kicked off a miniature gold rush in The Dalles and points east. But, so far as is known, nobody ever did manage to figure out where the robber's secret cabin was.

The cabin, of course, is long gone. But the possibility remains that somewhere up there in the High Cascades, under the forest duff where 150 years ago a tree grew, nearly $3 million worth of gold ingots are nestled snugly in the dirt.

(Sources: Lost Mines and Treasures of the Pacific Northwest, a book by Ruby El Hult published in 1957 by Binfords & Mort Publishers) 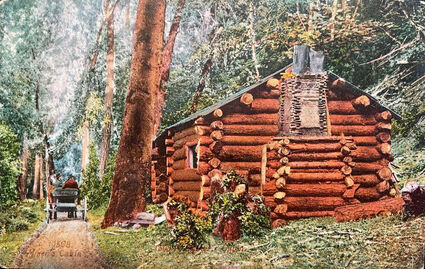 Postcard image of a miner's cabin near Grants Pass, published by Edward H. Mitchell of San Francisco. This postcard was postmarked Oct. 12, 1908.