Speed vegetables to the table by growing in water 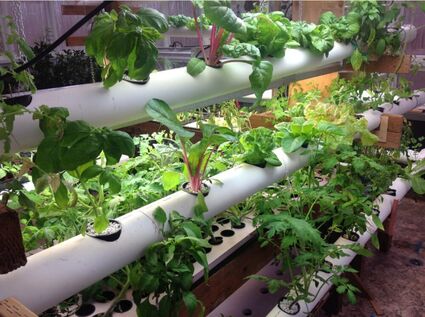 Ask experienced gardeners what makes their garden grow and they'll come up with the same response: great soil.

Good answer, but not the only one. The same crops grown in soil thrive in water, too, as long as there are nutrients and oxygen involved.

In fact, vegetables grown hydroponically root and grow faster than traditionally grown plants, said Barry Burnsides, an Oregon State University Extension Service master gardener. This ages-old system uses a mixture of water and nutrients to grow plants inside or out. He does both, but prefers the outdoors because there's no need for lights.

"You can grow any plant in hydroponics if you use the proper system," said Burnsides, who spent months researching hydroponics and building four of the six types of systems. He grows lettuces, greens, peppers, cilantro, cucumbers, basil and even tomatoes, melons, squash and cucumbers on trellises.

He said the easiest system is the floating raft method. In its simplest form, a floating raft system consists of a sheet of foam with holes cut in it for the net pots that will hold the plants. The foam floats on a tub containing water, nutrients and oxygen. The oxygen is added to the nutrients using an aquarium pump pushing air through a 1-inch porous soaker hose. More nutrient mixture is added as the plants take it up.

Burnsides also recommends the nutrient film technique (NFT). In that case, pipes with holes drilled in them for plants are positioned horizontally at a slight angle so the water easily moves through with the help of gravity. The nutrient solution is moved by a small fountain pump through a ½-inch line to the highest point and flows through the pipe and over the plant roots back to the storage tank. An aquarium air pump is used to add oxygen to the nutrients in the storage tank.

"Hydroponics is efficient," Burnsides said. "It takes less water than growing plants in soil. In dry areas, it's a big plus. The other place it shines is if you're trying to grow in an area with poor soil."

Hydroponic systems generally need grow lights and heat when used indoors, according to Burnsides. He advises doing a search of the Internet for resources. There are many how-to articles and videos as well as materials and kits to buy.

Though he grows inside – especially to start seeds or for cuttings of things like fuchsias, rhododendrons, coleus and hydrangeas – Burnsides suggests starting with a floating raft or NFT system outdoors. Be sure to give plants eight hours of sunlight and use shade cloth with 30 percent screening during the hottest part of the year and frost cloth for freeze and bug protection.

"It's nice to set one up next to the kitchen," he said. "You can harvest salad or stir-fry for dinner right out your back door. You don't get any fresher than that."

For most plants, Burnsides uses a fertilizer formulated for tomatoes, which is premixed with the correct amount of micro and macro nutrients. He adds it to the water and replenishes as plants take it up. Lettuce grown hydroponically is ready to harvest in 30 days rather than the 60-day cycle it takes when grown in soil. There's also the benefit of no weeds, fewer diseases and pests and the need for less space. Of course, there's always the best reason to grow vegetables in any kind of medium: the quality of the produce.

"You wind up with the ultimate, freshest veggies," he said. "The flavor and crispness and quality of what you can grow is better than what you find in the store. And to see the growth stages and know you were part of that is rewarding."