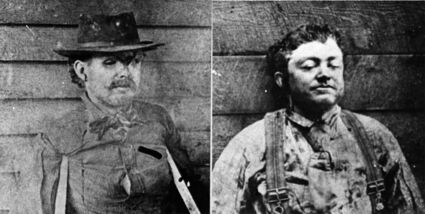 The bodies of Bill McCarty and his son, Fred, after they were slain in the McCarty gang's last bank robbery.

Imagine yourself as a television network executive at NBC in 1973. The bright, happy Western classic "Bonanza" is about to be canceled. In a last-ditch effort to save it from the ax, you've been asked to put a fresh, "western-noir" spin on the show so that it can compete with the darker TV fare that's now in fashion - like "All in the Family" and "M*A*S*H."

Here's something you might come up with: Old Ben Cartwright, now that he's built the Bonanza Ranch to prominence, moves to Oregon with son Adam, leaving the Bonanza to his other two sons, Hoss and Little Joe. After running the ranch for a few episodes, the boys get impatient, sell the Bonanza and promptly burn through the money at the gambling tables in town. To support their lifestyle, the two become family-style outlaws: large-scale cattle rustlers, bank robbers, and friends of the legendary outlaw Butch Cassidy.

Oh, and along the way, they move to Oregon.

Your new, "improved" Bonanza would surely not have lasted a minute in an NBC pitch meeting. But it's the basics of the story of a famous outlaw family called McCarty, a gang of brothers and brothers-in-law that made life in eastern Oregon very lively for the first few years of the 1890s.

The McCarty family came from the gorgeous cattle country of San Juan County, Utah. The old man - Lorne Green's character, in our rebooted "Bonanza Noir" - was a surgeon in the Confederate army during the Civil War, who became a successful cattleman in Montana before settling down there and building, with his sons, a ranch that should have made them wealthy squires.

On the Outlaw Trail

One of the boys, Tom - the "Little Joe" character - hit the outlaw trail right away with his brother-in-law, Matt Warner, and soon fell in with Butch Cassidy. Several high-profile bank robberies later, the Tom, Matt, and Butch were outlaw royalty. They became famous as "The Invincible Three."

Brother Bill - the "Hoss" character - became a large-scale cattle rustler. Eventually, though, he gave up the outlaw life, bought himself a spread near Baker City, and with his son Fred, tried hard to make a go of it as a legitimate rancher.

Meanwhile, Brother George - the "Adam" character - had still been under the stabilizing influence of old, respectable Dr. McCarty ("Ben Cartwright"), running cattle in Harney County near Haines. But after Dr. McCarty moved to Myrtle Point, George, too, was at loose ends, and feeling his larcenous oats. As Bill tried to make a go of his new ranch, George was trying to make a go of a mining claim a few dozen miles away, in the Blue Mountain boomtown of Cornucopia. Neither of the two was having much luck.

That's probably why, when Tom and brother-in-law Matt rolled into town and asked if they'd like to get back into the family business, neither required much convincing.

The McCartys started by rigging Bill's money-losing ranch - the New Bonanza, if you will - as an outlaw hideout, with secret chambers and tunnels and hollowed-out haystacks. Then Tom, his pockets still jingling with the proceeds of his robberies with Butch Cassidy, went out and started buying remote pieces of property around the area that the gang could use as hideouts and staging spots for rustled cattle.

Meanwhile, the rest of the gang was coming together, a group of wives, sisters, nephews, and cousins, all tied together by blood and kinship. Those ties would make the McCarty gang very strong. They would also lead directly to its ultimate destruction.

The gang's first hit was the Wallowa National Bank in Enterprise. It was a textbook bank job. They put on homemade horsehair beards to mask their faces without being masked. Tom stood guard by the door, keeping customers from coming in; Bill and Matt strolled into the bank and stuck a six-shooter in the teller's face. They got out before the townspeople knew what was happening.

This last item was critical: Eastern Oregon was famously hostile to bank robbers, and five minutes could mean the difference between a clean getaway and a running, unwinnable gun battle on Main Street with 50 or 60 angry depositors behind Winchesters borrowed from the local hardware store. The McCartys would eventually learn this lesson the hard way.

In the meantime, though, they were on to a string of successful stick-ups. A few weeks later, they jacked up the Summerville bank at 9 p.m., taking advantage of the cover of darkness. This heist went even more smoothly and netted them a full $5,000.

An attempt to rob the wealthy patrons of the Hotel Warshauer in Baker City didn't go so well. In the middle of the operation, a cop saw Tom and Matt in an alley looking scruffy in their horsehair beards and tried to arrest them for vagrancy. Matt clobbered him with his rifle and they all ran for it, empty-handed.

An attempted train robbery ended with even more embarrassment. They piled a bunch of debris on the tracks and lurked, waiting for the train to stop so that they could rob it; but the engineer, who was clearly no greenhorn, knew immediately what was going on and opened up the throttle wide - risking a high-speed derailment because he knew there were men with guns waiting in the bushes. He won the bet. The cowcatcher cleared the junk and the train disappeared around the next bend as the four disappointed bandits watched, coughing on its coal smoke.

Oregon was getting too hot for comfort, so the gang moved up to the Washington Territory and pulled a string of heists up there - successfully knocking over banks in Wenatchee and Roslyn and nearly getting caught and shot trying to rob a circus. But then Matt's sister-in-law came to stay with them, and, convinced their lifestyle wasn't good for her sister (Matt's wife), ratted them all out. Matt and George were arrested, and their lawyer got them sprung but then cleaned out their entire stash - $41,000.

After that, the gang decided the Northwest was too hot for them, and they headed to Colorado - for one last bank job, on Sept. 3, 1893, in Delta. 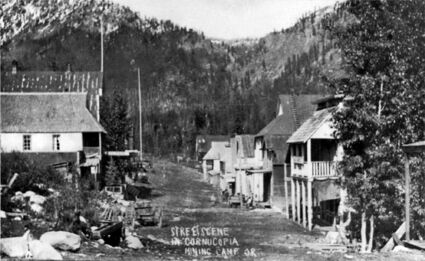 During this heist, one of the boys murdered the teller. Alerted by the gunfire, the town started rallying, by the time the robbers left the bank, the local hardware store owner was ready for them with his .44 Sharps rifle. As they galloped out of town, he picked off Bill (in our "Bonanza" reboot, that's Hoss) and his son Fred. Both were dead before they hit the dirt.

The others got away. But after that disaster, the McCartys never rode again.