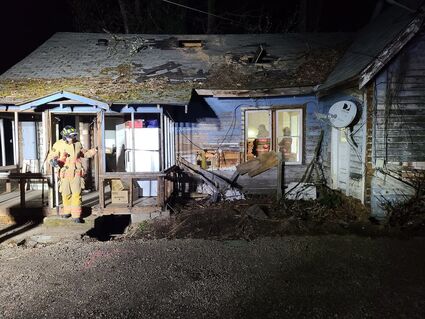 During McKenzie Fire & Rescues' morning and evening drills on February 23rd, crews were able to get valuable training on a structure owned by Jon and Jerri-Jo Payne. The house, at 42831 Leaburg Drive, stood behind the Leaburg Store and was scheduled to be torn down to make room for a new home.

Over 25 fire district members were able to take part in the training - breaching interior and exterior walls, as well as the ceiling and roof.

Breach a wall is viewed as a lifesaving skill. "If a firefighter were to get trapped inside a structure," according to McKenzie Fire Chief Darren Bucich said. "The ability to breach a wall is a strategy that might save their life." 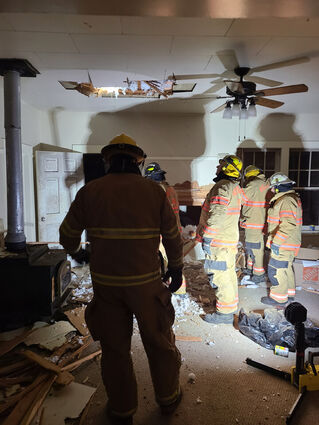 The structure also involved practice on vertical ventilation. "Cutting a large opening in the roof isn't a skill we use often but there are times when it needs to be done to slow the spread of fire in the attic," Bucich says. "Due to the age of this structure, it created its own challenges for our crews to work through."

Normally, breaching an interior wall only involves breaking through sheetrock on both sides of the studs. Inside this house, in addition to sheetrock, trainees discovered the home had been built using Shiplap walls (an extra layer of wood approx. 5/16" x 3-5/8") which created it own challenges for the crews.

"Overall, it was an excellent drill for volunteers," Bucich said. "We would like to extend our appreciation to Jon and Jerri-Jo for allowing us the rare opportunity for a live practice."