Some residences will be removed 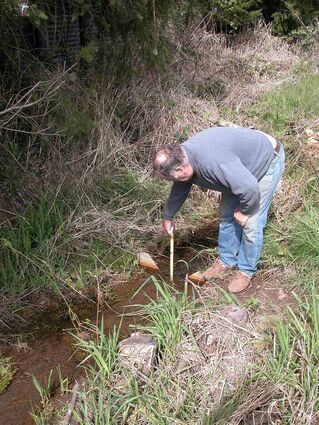 For years, Norm Carter monitored seepage from the Leaburg Canal on a daily basis at his property in the 43000 block of McKenzie Highway.

LEABURG: The McKenzie Valley's housing stock took a severe hit when 464 dwellings were destroyed in the 2020 wildfire. Residents of some homes along the Leaburg Canal say as many as eight others probably won't be lived in much longer, after they're sold to the Eugene Water & Electric Board.

A memo from Lisa Krentz, the utility's generation manager, was posted on social media this week. It noted EWEB is purchasing properties "in anticipation of future construction work on the Leaburg Canal in the vicinity of Cogswell Creek. Buying the property will ease construction access to that site in the likely event that EWEB needs to make alterations to the canal there."

In addition to the Cogswell Creek area (near the Leaburg Dump) several property owners along Johnson Creek Road say they've also been in negotiations with the utility. Among them are parcels that extend as far west as the curve near the Leaburg powerhouse.

Over the years different area residents have voiced concerns about seepage from the canal levees but had difficulty convincing EWEB it bore responsibility. Those concerns became reality in 2018 when the Federal Energy Regulatory Commission directed the utility to drain the canal until repairs could be made. Since then EWEB has conducted studies looking at options that range from restoring the facility to full operations to its possible decommssion and removal of the Leaburg Dam.

In a February 22nd letter from FERC the agency commended the utility for improving the quality of their dam safety monitoring and field inspections for the Leaburg Canal. The letter noted the additional equipment to the hazard mitigation system created ways to "actively and passively monitor the water surface elevation at multiple locations." On the downside, though, FERC criticized the utility for not installing similar equipment for the Walterville Canal, "even though portions of it are also categorized as having a High Hazard classification." The letter went on to say the agency strongly encouraged EWEB to add those features at their downriver hydro facilities, "especially considering ongoing concerns about seepage and internal erosion piping at the Walterville Canal Forebay."

"Safety is our first consideration," says Aaron Orlowski, EWEB Communications Specialist, "There is not an imminent danger of a canal breach. EWEB staff will continue to carefully monitor the performance of the Leaburg Canal throughout the evaluation process, particularly in the wet weather season and during storm events when tributary creek flows rise."

EWEB says the utility's staff members "are poised to identify and respond to any unexpected developments along the full length of the canal and will inform canal neighbors of any changes of concern."

A discussion of the canal will be one of the main agenda items at the Upriver Board Meeting on April 19th which will be held at McKenzie Fire & Rescue's Leaburg Station.