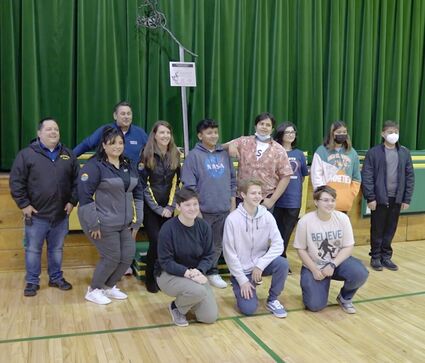 FINN ROCK: "It was a super cool experience," was the way McKenzie High junior Anna Reidmann reacted after seeing the Manzanita sculpture and the student artists who delivered it. "That branch represents standing through the fire - just keeping on. We lost a lot and they had similar stuff going on."

Phoenix-Talent School District Superintendent Brent Barry said the idea developed from a realization that their area wasn't alone in being impacted by the wildfires of 2020. "We lost 2,400 homes and we're still recovering and rebuilding," he said. The original plan was to create some local artwork but it got "bigger and bigger and bigger," he said. After dropping off their artwork at McKenzie they were traveling on for another gift giving to the Santiam Canyon School District, which had also been hit by fire.

"You'd be surprised at how slow rebuilding can take," noted McKenzie Schools Superintendent Lane Tompkins. That sort of recovery he feels could also provide an opportunity to, "make things better and correct some things that may have happened in the past."

The gift from the visiting students, Tompkins said, is sure to be long lasting. "As the kids come back - say for a homecoming game, they'll bring their kids up." The sculpture can provide a focal point to look back and "appreciate in a good way that you're not alone," he said.