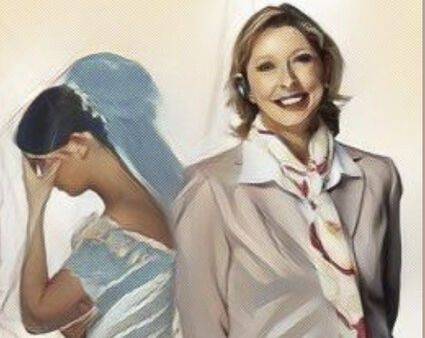 I am a happily married 23-year-old woman with one problem, my husband's mother. She was against our relationship as soon as she saw it becoming serious. Prior to me entering the picture, she gave him assistance for college, but she froze him out financially so he wouldn't marry me. When she cut him off, she said he would need her before she ever needed him.

After we married she still introduced me to people as his girlfriend, not his wife. When my husband confronted her on this, she got upset and stopped introducing me altogether. Now when we have family gatherings she doesn't speak to me, not even to say hello or goodbye. She told my husband she pretends he isn't married.

As you can imagine, this has altered my husband's relationship with his mother. They used to be very close. Too close I think. My mother-in-law stayed in an unhappy marriage and is very bitter. She latched onto my husband and confided in him as though he was an adult. He took up much of the emotional slack for his father.

My mother-in-law has no reason to dislike me. We are planning to have children in the future, but I don't want them around her. If she can't accept our marriage or respect me enough to speak, then I know she would do things to taint my image in front of my own children.

My husband and I have talked to her individually and together. Each time she proclaims she will get better but gets worse. My husband told her, if she forces him to choose between her and his marriage, he will choose his marriage. I would like to make things better for my husband's sake. I don't want him to shut her out, even if it is her own doing. What can we do?

Erin, your mother-in-law is playing the child's game "Let's Pretend." Let's pretend my son doesn't have a wife. If a child throws a tantrum every time you go to the store, you explain to the child if she has a tantrum, you will leave. Then you don't go to the store unless you are willing to walk out, not having made your purchases.

Make sure your mother-in-law understands what the consequences of her negative actions will be, and don't socialize with her unless you are willing to leave. You aren't asking for anything more than basic human civility. It is her choice to give it or not.

That you are willing to give her that choice is to your credit. She raised a son to grow, move on, marry, and have children, not to take the place of a husband who never fulfilled that role.

I am currently in a relationship with a girl who lives a few hours away. She is a singer and is either recording or singing someplace. Although she hasn't done any major appearances yet, she wants to break into the big time.

I haven't been able to speak to her recently. I've tried all methods, including phone calls, emails, and text messages. I don't get any answer. I understand fully that she has a busy life. My fear is that we are drifting apart, and I am considering ending the relationship to take the stress off both of us. Should I end it, or try to tough it out?

Gary, you know your girlfriend is not in danger, critically ill, or dead along the side of the road. If you suspected any of those things, you would have called the police, her family, or local hospitals. You also know she is too busy even to send a message saying "I'm all right," or "I miss you."

In your heart you know what she is doing, she is doing it with intent. Her silence tells you everything you need to know.