Snapping turtles are worse than their bite 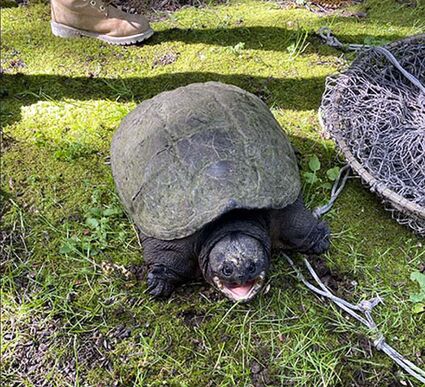 Capturing a snapping turtle should be done cautiously - keeping in mind how they got their name.

Snapping turtles, an invasive species in Oregon, are nesting this time of year and are more likely to be encountered on land which is an opportunity for the public to help out, wildlife officials say.

Snapping turtles can harm native turtle populations as well as amphibians, mammals, birds, and fish. Oregon Dept. of Fish & Wildlife (ODFW) wildlife biologists are citing an uptick in reports. Recently, some people have captured some.

If a snapping turtle is sighted on land and it can be contained safely, ODFW suggests putting a large sturdy container - like a plastic storage tote - over the turtle and placing a heavy object on top to prevent the turtle from escaping. They caution people to stay away from the snapping turtle's head - they have a long neck and a powerful bite.

The common snapping turtle, indigenous to the eastern United States but invasive in Oregon, can reach up to 18 inches in length. Its top shell is strongly serrated and varies from tan/brown to olive to almost black. Its tail has three rows of saw-tooth keels.

Sightings of snapping turtles can be reported at oregonturtles.org. Captured turtles can be delivered to an ODFW office when they are open (Monday through Friday, 8 a.m. to 5 p.m.) - call ahead to arrange delivery.