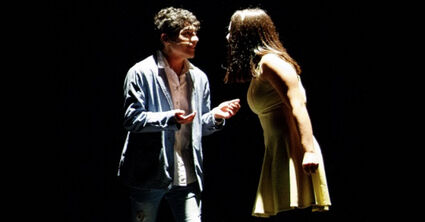 I am a young woman who is single again after a nasty breakup with her ex. We divorced when he suddenly realized he was transgendered. He started the process of turning into a woman, but a few months later, begged me on his knees to give him a second chance. I did. When I found out "she" cheated on me, it was the final straw.

Recovering from this traumatic experience took a long time, and I was convinced I function best as a single gal. That is, until a few days ago. I am a director of theatre productions and was hired to direct a show in another city. There I met and worked closely with the lead, a 27-year-old semiprofessional actor.

We hit it off well, but I maintained a professional and ethical distance. Now that the show is up and running, there is no longer a gap between business and pleasure. I will definitely be seeing more of this guy. He is single, but I haven't the foggiest idea how to get him to notice me, or how to read his signals.

He is handsome, funny, and intelligent, and our interests coincide. All I've noticed so far is that no matter where I am, our eyes constantly meet. Even on opening night, when I was sitting three rows back, he knew where I was. After the show he mentioned it.

At the cast party, he sometimes ignored two model-type beauties to talk to me. And only me. Though I can't compete with them, I make sure to look my best when I am around him. I am stocky with facial features people call "handsome" when they try to be nice.

I always make sure my body language is friendly and open. I've touched him to direct him, but we've never gone beyond a civil handshake. I would like to be friends with this gent, and possibly more than friends.

Amber, from an actor's point of view, the director is the person who shines the brightest light. The director provides opportunities, present, and future. Even with the show-up and running, your relationship is still a professional one.

The actor's stock-in-trade is showing emotions and body language which belong to another character. In pursuing him, you are not being yourself. You are posing yourself for effect. All of this complicates genuine interaction.

At this stage in your career, do yourself a favor by making it a practice to decide matters on their merits. Who you hire and who you cast should be based on who can do the job and who is right for the part. Don't allow yourself to take advantage of your position, or allow others to use you to their advantage.

He is a 27-year-old man. If he's interested, he'll ask. But ask yourself this, Does an insurance agent send you a birthday card because he cares deeply about you, or because he wants to sell you more insurance?

I went to kiss a former business associate goodbye after meeting him for dinner. We are both married, and I accidentally kissed him on the lips, creating a consensual "goodnight kiss." He is retired and I need to call him for a reference, but now I am embarrassed. What should I do?

Roseanne, I can absolutely picture you doing that. Being in proximity to another man, with just the right amount of distraction, in a familiar posture, you kiss him as you would kiss your husband. Oh, no!

He knows you didn't mean the kiss, and you know you didn't. This is no different from walking out of the ladies room with your skirt tucked into your underwear. It's awfully embarrassing, but it won't kill you. The sooner you let go of it and laugh it off, the better. In a businesslike way, ask him for the reference you need.