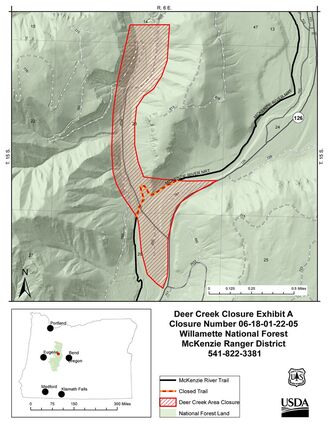 MCKENZIE BRIDGE: Access to the McKenzie River National Recreation Trail and Roads 2654-2655 will be affected from June 13th to July 22nd.

The U.S. Forest Service and the McKenzie Watershed Council have partnered on a restoration project on the lower portion of Deer Creek. Work there was designed to restore natural processes that create and maintain diverse habitats for fish and wildlife. To date, officials say, the project has been successful, and Phase Four of the project will be implemented this summer.

During that time, heavy machinery will be used in the area. For public safety, a closure order will be in effect from June 13th through July 22nd. The area encompasses approximately 1.5 miles of Forest Road 2654 (Deer Creek) from the junction of Highway 126 north on Road 2654 to Road 2655. The closure order also includes both sides of the road along this entire stretch.

During the project, people may see high levels of sediment in Deer Creek and the McKenzie River downstream as Deer Creek flows into the river. Effects like those are expected, as a temporary result of in-water work and rewatering newly redistributed sediments in the project area.

After the project is completed, high levels of sediment in Deer Creek aren't expected until winter rains bring higher flows and begin to redistribute and sort sediment in the project area. Again, officials say this will be part of a natural process.

The McKenzie River Trail (MRT) will re-open after the completion of the project. The trail is currently closed due to impacts from the Knoll Fire which burned approximately two miles of the trail in 2021. One mile of the trail tread will be repaired by volunteers, and the other mile will be restored using equipment from the Deer Creek aquatic restoration project.

MRT through-hikers are going to be rerouted (heading south) to roads 713, 2654, and 2655 to get back on the trail until June 12th. From June 13th to July 22nd, the rerouted area won't be available while Phase Four of the Deer Creek project is underway. After the project s completed, plans call for the reroute to be made available as soon as possible.