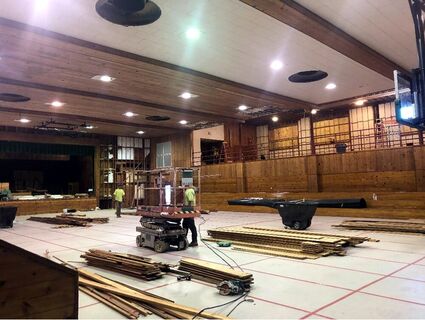 FINN ROCK: Three upgrade projects were put into motion the week after McKenzie Community Schools classes let out on June 20th. Scheduled to run through the summer and fall, the work is being done by Chambers Construction of Eugene.

Some of the most extensive work involves the “Old Gym.” Work on the structure was made possible by the Seismic Rehabilitation Grant Program through Business Oregon, a consortium of public agencies within the state. The school district was awarded $2.3 million dollars to ensure the gym would be better able to withstand an earthquake while also providing a safe way to exit for students and staff. In addition, the upgrades could potentially upgrade the building as a community gathering point, much like the New Gym did following the Holiday Farm Fire.

Part of the work involves removing sections of the original wood paneling so plywood can be installed to make load-bearing walls stronger. As much as possible of paneling is beginning salvaged so it can be placed back over the plywood structures.

The ceiling is also being strengthened with plywood and the acoustic tile up there will be replaced as well.

Below ground, concrete is being poured into new forms for strengthened connections. Although that work is scheduled to be completed in September, there may be a segment where students and staff will have to work around the construction.

Some other work on the storage building, concession stand, and replacement of the grandstand is scheduled to be completed by late October. Those structures are being replaced with fire-resistant materials and will occupy the same footprint as the original buildings 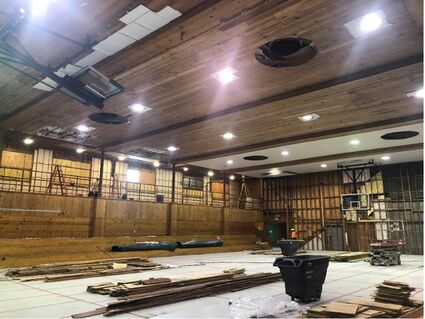 The rebuilt grandstands will have approximately the same capacity as the ones that were lost in the fire and covered along with a press box. Work on those projects is being funded through a combination of insurance, FEMA, and state wildfire funds.

Over at the “New” Gym work will include replacing the failing roof, damaged siding, and waterproofing the foundation to make the structure water-tight. Funding for that work came via state wildfire grant funds secured by Senator Prozanski and Representative Hayden. Work there has been delayed due to some concerns around supply chain issues with roofing materials but is slated to begin in early August.

School Superintendent Lane Tompkins is pleased with the combination of improvements. “We’re excited to undertake this work to help preserve the school for our students, staff and the entire McKenzie community,” he says.