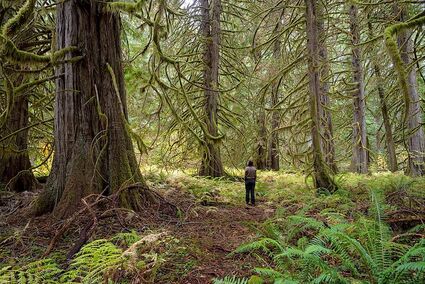 The 5,000-acre Flat Country Timber Sale is off Hwy. 126, about 8 miles east of McKenzie Bridge. The proposal includes 1,000 acres of "regeneration harvest" and various methods of commercial thinning.

Plans for commercial logging of old-growth forests on federal lands have moved forward this year, despite an executive order signed on Earth Day by President Joe Biden, according to a report from environmental groups.

The old-growth woodlands are particularly useful in fighting climate change by absorbing carbon, a goal for the Biden administration.

The Climate Forests Coalition, a group of dozens of environmental organizations including Environment America, the National Resources Defense Council, the Center for Biological Diversity, and the Sierra Club, prepared the report highlighting 10 logging projects in older forests that have reached some level of federal approval.

The projects collectively threaten about 240,000 acres of older forests, the report says.

Biden announced an executive order on Earth Day in April to catalog old-growth forests and establish a federal strategy to protect them, a move the coalition called an important first step.

"But many of these old trees could be gone before that work is completed," the report says. "The administration urgently needs to provide permanent protection for them."

Federal approvals for logging of older forests have continued, according to the report.

Madeline Cowan, an organizer with Oregon-based environmental advocacy group Cascadia Wildlands, said federal agencies have not followed through with the order's objectives.

Logging projects, like the Flat Country Timber Sale in the Willamette National Forest, were already "way along" when the executive order came out, and the order did not change their trajectory, they said.

"It was a really good step, but what we're upset about is the fact that the agencies are continuing to push this project through," Cowan said. "It's just outrageous that the federal agencies have this high-level executive order and there's been virtually no response."

The administration should reconsider individual agency decisions to approve logging in light of the executive order, they added.

The Biden administration and the international community have set aggressive climate targets for the end of this decade in an effort to curb global temperature rise and avoid the worst potential impacts of the crisis. Saving older forests would be effective in that effort, the report says.

Commercial forests are often grown to maturity and then harvested before they reach old-growth status, Environment America public lands director Len Montgomery said in an interview with States Newsroom. But that reduces the number of old-growth trees and limits their carbon absorption.

"We need this carbon sequestration benefits sooner than 150 years from now," Montgomery said. "We actually need them tomorrow, but they'll be more helpful in 10, 20, 30 years."

The Forest Service said the plan is "designed to maintain and improve old growth characteristics on the landscape, and ensure it persists into the future." The plan does not allow "harvest of old growth ... except if needed for public safety or to address insect or disease hazard."

Other projects in the report include:

The Flat Country Timber Sale in Oregon's Willamette National Forest includes 2,000 acres of older forests, half of which would be clearcut.

The Poor Windy Project in the Medford, Oregon, District of the Bureau of Land Management includes almost 4,600 acres of mature and old-growth trees.

The Integrated Vegetation Management Project in the BLM's Medford District includes 20,000 acres of trees that are more than 150 years old.

The Fourmile Vegetation Project in Chequamegon-Nicolet National Forest in Wisconsin, where two-thirds of the stands covering 12,000 acres are more than 80 years old.

The Buck Project in North Carolina's Nantahala National Forest would see clearcutting of 150 acres of more than century-old trees. The first logging unit sale for the project started in June, according to the report.

The Burnt Corral Vegetation Management Project in Kaibab National Forest in Arizona, which would include "15,000 old and large, fire-resistant trees," the report says. That project is still awaiting Forest Service approval.

Representatives for the USDA and Interior Department, as well as the Forest Service and Bureau of Land Management, did not return requests for comment Monday.