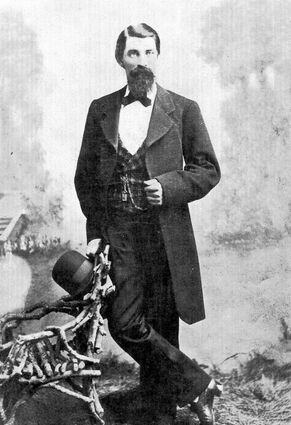 Hank Vaughan in his Sunday best, posing for a portrait photo when he was roughly 30 years of age. Vaughan favored the Prince Albert-style coat because it hung down far enough to conceal his pistols.

Crime, they say, does not pay.

Yet it's pretty easy to look back through history and find examples of a certain kind of criminal for whom it did, handsomely, and for decades. With charisma, moxie and a seemingly endless supply of good luck, these characters sometimes even manage to cheat karma and die a natural death. And somehow, after these criminals are gone, people remember them with a kind of fascinated fondness, and say things like, "well, we'll never see another like that again."

The second half of the 19th century saw such a man in a larger-than-life Wild West character named Hank Vaughan.

Hank Vaughan is remembered by folks who met him sober as a slender, wiry fellow with a sober look, a full set of whiskers and a Prince Albert-style coat, very affable and charming, but with gray-blue eyes that seemed to hold you. Most people liked him, even if they were a little afraid of him.

Others didn't like him much at all – especially the owners of the horses and cattle that would reliably vanish when he came around their herds. Hank was, for most of his life, a horse thief and a rustler –possibly the most successful rustler in the history of the Old West.

And then there were the folks who met Hank when he was drunk. Some of these didn't survive the experience. Hank Vaughan was in at least a dozen gunfights in his life. There are old saloon buildings in The Dalles, Pendleton and Athena that still have .45-caliber slugs embedded in their woodwork from his Colts, and gouges on their floors from his horse's hooves.

Historian Noah Brown, a former employee at The Umpqua House saloon in The Dalles, describes a typical scene from Vaughan's heyday – as quoted in Jon and Donna Skovlin's excellent biography of this "hell-raising horse trader":

"On (Vaughan) entering the saloon drinks were ordered for the house," he writes. "Needless to say a crowd ambled up to the mahogany and foot rail in the sampling of Old Crow until the room was full to overflowing. It was not a great while until nearly every individual was in the same fix ... A shot fired from a six-shooter in a frolicksome way pierced a hole through a back-bar mirror. Tabs were kept on all drinks, damage to furniture, incidental expenses added and by the next evening those typical early-day Western trailblazers and pioneer characters ... paid ... the full lucre for their gentlemanly tete-a-tete of their own liking in the year of 1881."

In riotous barroom scenes like this, Vaughan was first among equals. He was a fun if dangerous friend, happy-go-lucky and fearless in any kind of fight. His skills as a horseman were legendary, and he could drive nails with a pistol from 20 yards away. But if you were a horse rancher or a cattle drover, he was the last guy you wanted to see.

Hank Vaughan was born in 1849 near Brownsville, in the Willamette Valley. He was one of the very first babies born in the old Oregon territory – although some historians would later try to claim he was really from Missouri, motivated apparently by a desire to keep the Beaver State's reputation free of the stigma of having produced such a rascal.

Hank's family moved to Canyon City when he was about 12 or 13. By age 15 he was an active horse trader with a chip on his shoulder and a pistol on his hip – with which, that very year, he made his first attempt to kill somebody. A customer named William Headspot, to whom Hank had been foolish enough to sell a horse on credit, tried to buffalo the boy by jeering at him and claiming the horse he'd bought from him was stolen. (It probably wasn't, but it might have been.) Hank, incensed by the insult, pulled his Colt and used it to carve a bullet-shaped furrow across Headspot's scalp; half an inch lower, and Hank would have been facing a murder rap.

He was arrested and charged, but he didn't really face much risk of being convicted because of Headspot's behavior. However, a few months later, free on bond, Hank saw the man who'd signed the arrest complaint walking into a saloon in which he was drinking. Out came the six-shooter again, and Hank shot and wounded the complainant.

The wound doesn't seem to have been very serious, but now Hank's situation was. It was one thing to reply to an insult with gunfire; the Canyon City miners and cowboys didn't approve of that, but they understood, and most of them figured Headspot had had it coming. But to retaliate in semi-cold blood against a man for doing his duty as a citizen was entirely different. Had Hank's aim been better, he almost certainly would have been lynched that day.

As it was, he spent four months in jail, at the end of which he copped a plea: A one-dollar fine and an agreement to join the First Oregon Volunteer Infantry.

That lasted just a few months. Six weeks after Hank mustered in, the Army spat him out. He left with a dishonorable discharge, but it saved him from the state pen and left him free to get back to the business that was already clearly his forte: Horse theft.

The shootout with the sheriff

It was just three months after Hank left the Army that he and a friend, Dick Bunton, traveled to the foothills of the Blue Mountains, stole a few good horses from a ranch there, and headed for Idaho Territory with them.

But Umatilla County Sheriff Frank Maddock and Deputy Jackson Hart were hot on their trail. The two lawmen got the drop on them one night while they were camping by Swayze Creek near the Burnt River, close by the Idaho border. And when the two lawmen slipped up to the sleeping boys and yelled for them to throw up their hands, they both woke up shooting.

The gunfight was short, but very eventful. Hart was killed on the spot. So was Dick Bunton. Maddock was wounded badly, a bullet actually passing through his skull and breaking his jaw and wrecking his inner ear, and knocked unconscious. Hank had been hit in the thigh and scalp.

Dragged back to the notoriously rope-happy town of Auburn to stand trial, Hank was nearly lynched by an angry crowd, and had it not been for the intervention of future U.S. Rep. John Hailey – who stood between the crowd and the jail with a cocked Colt in each fist until they gave up and dispersed – that would have been the end for Hank.

The sentence: Life in prison

The trial was fast and the outcome not much in doubt. The Dalles Weekly Mountaineer reported its outcome on June 16, 1865:

"Henry Vaughan, the boy thief and murderer, arrived at The Dalles yesterday in custody of an officer on his way to the penitentiary, where he is to pass the remainder of his life. This fellow is a youth ... yet he is steeped in crime, and regarded as one of the worst villains that ever cursed the country. It is to be hoped that he is not permitted to escape, as in the event of his return to this county he is sure to be hung." 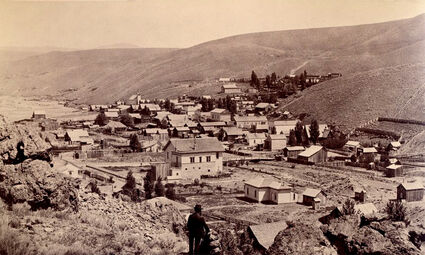 Canyon City as it appeared from a nearby bluff in 1885. This was the town in which, 20 years earlier, Hank Vaughan got in his first serious trouble with the law after he shot two people – one for calling him a thief, and the other for signing an arrest warrant.

And so to prison Hank went. He was under a life sentence, but he would only serve five years. Some historians have claimed that prison turned him from a wild boy into a hard-eyed monster, which is a fairly common pattern in such cases. However, the Hank Vaughan that emerged from prison seems to have been less dangerous rather than more. He certainly was more successful in his rustling endeavors after he got out. And while he certainly had his enemies and got in his share of gunfights and scrapes with the law, the post-prison Hank Vaughan seemed to have developed an ability to fit into and even dominate frontier social life. He'd never face a lynch mob again – because he'd learned how to get what he wanted from society without getting identified as a deadly threat.

Prison seems to have given Hank the discipline and social skills he'd need to survive and thrive in the 1870s and 1880s on the Oregon frontier. We'll talk about how that went next week.