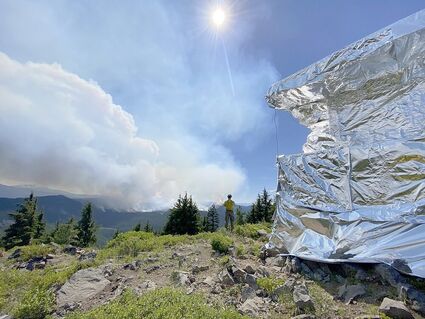 Crews used an aluminum-based wrap to help protect the Waldo Mountain Lookout. Although the wrap can't offer complete protection it's hoped to prevent the destructive effects of 2020 when the Olallie Lookout burned. Firefighters have been utilizing the vantage point to monitor and track the Cedar Creek Fire's movement.

By Tuesday, the Cedar Creek Fire near Oakridge had continued to grow. US Forest Service officials reported it was active on over 3,234 acres near Spirit Lake and on the southwestern flank. Fire growth has been minimal on the eastern flank of the fire due to more wet soil conditions and a change in fuel type from dense timber to more sparse conifer forests and meadows.

One water scooper and four helicopters were working to moderate the fire using Hills Creek Lake as a water source.

The fire also continued backing down toward Black Creek Road, where crews are still planning to use as a containment line for the southern flank of the fire.

Heavy equipment began arriving on the scene Monday. Masticators will be deployed to chip small diameter woody material along roadsides to make a safer control feature.

The entire Waldo Lake Wilderness area is closed due to the Cedar Creek Fire. This includes all trailheads and dispersed camping west and north of Waldo Lake. The lake itself remains open as well as campgrounds on the east side. A Temporary Flight Restriction (TFR) is in place in a ten-mile radius around the fire.

Fire restrictions are in place on the Willamette National Forest with the exception of the Three Sisters, Mt. Jefferson, Mt. Washington, Waldo Lake, and Diamond Peak Wilderness areas. All campfires, charcoal or briquette fires, pellet fires, or any other fires will be prohibited, except in designated campgrounds. Portable cooking stoves, lanterns and heaters using liquefied or bottled fuel are still allowed if they can be switched on and off. Motorized vehicles may operate only on designated trails and roads, including within the Huckleberry Flats and Santiam Pass OHV areas.