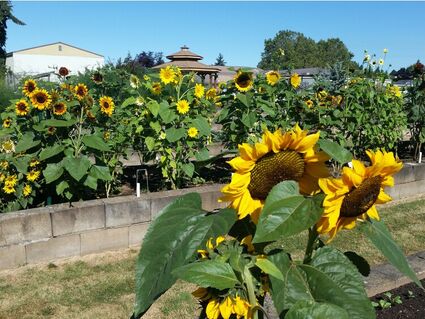 As a child Harry Olson tended sunflowers in his parent's garden, watching them sprout and stretch twice as big as his small frame.

For more than 65 years since he's not forgotten the experience. He loved the sunny yellow blossoms and still does. But these days his affection has expanded to include a whole bouquet of new sunflowers.

"Back then sunflowers were all the same," said Olson, an Oregon State University Extension master gardener. "Over the years, when I'd get seed catalogs and poke through them, I started to notice every year more and more kinds of sunflowers. They were glorious things."

With names like 'Shock O' Lot,' 'Starburst Lemon Aura' and 'Copper Queen,' the new varieties burst the stereotype of the familiar sunflower. The colors range from orange to dark burgundy. Some don double flowers. The traditional 6-foot, the single-stalked plant now comes in sizes from 15 inches to 12 feet and many grow into multi-stemmed plants.

Having dedicated some of his volunteer hours as a master gardener to growing trial gardens of grafted vegetables, Olson formulated a plan to do a demonstration bed of sunflowers. He approached Jim Liskey, a volunteer in Marion County and recipient of the 2016 Master Gardener of the Year award. They enlisted Tobie Habeck, another active master gardener, to help.

After getting a donation of 18 varieties of sunflowers from the wholesale nursery Log House Plants in Cottage Grove, the three went to work planting on June 9 at the Marion County demonstration garden at 3180 Center St. N.E. in Salem. They arranged the plants by height – 15 inches to 12 feet - from south to north.

"We thought we'd have a cascade from high to low," Liskey said. "But we found the ones that were 15 inches tall matured earlier and lost their blooms before the others started to bloom."

To avoid that problem, he recommends planting the tall ones first, mid-sized varieties three to four weeks later, and the short sunflowers about two weeks after that.

Sunflowers aren't picky, but they do desire well-drained soil and an application of a balanced fertilizer. Liksey used a 10-10-10 at planting time and again four weeks later. The plants were watered with drip irrigation for 45 minutes three times a week.

Both Liskey and Olson enjoyed watching the sunflowers turn from east to west as the day goes on and then rotate back east during the night to start over again. This process, called heliotropism, allows the growing leaves and immature flowers to absorb 10 to 15 percent more sunlight for photosynthesis than if they were sitting still.

As he maintained the demonstration garden, Liskey became interested in the health benefits of sunflower seeds and did some research. He found they contain high amounts of magnesium, potassium, selenium, zinc, iron and Vitamin E.

"They are also very low in cholesterol and sodium," he said. "On top of that, the oil is good for cooking, not just because of the oil's nutritional benefits. It has a light taste and can be used at high temperatures."

Sunflowers aren't just beneficial to people, he noted. Except for the pollen-less varieties, which perform well as cut flowers, the blossoms are a magnet for pollinators and birds can't get enough of the seeds. To keep some of the seeds for yourself, harvest when the plant wilts, the petals have fallen and the back of the flower turns yellow to brown.

At the garden, the two master gardeners noted the interest of visitors, which was the main reason they decided to try to do the demonstration.

"What we were hoping to do is make the public aware so that when they go to the nursery next year they can get what they know they like," Olson said. "I wanted to see all these extraordinary-looking sunflowers, and I assumed everyone else would, too. And they do. People flock to the sunflowers. They can't help themselves."

There are still plenty of sunflowers in bloom, he said. So if you're in the Salem area, make a visit and see them in person. Each one is labeled. Or, you can take a look at the Log House Plants website to see all 28 of the varieties they'll be supplying to garden centers next year.