What could Leaburg Dam removal mean?

Impacts include recreation and area fisheries 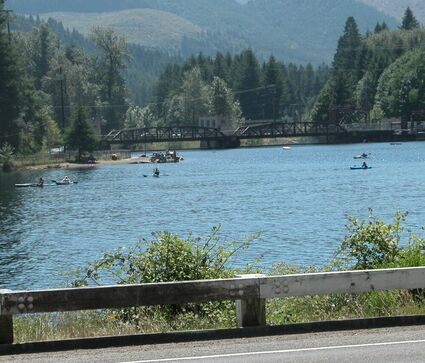 Activities, like kayaking the lake on a summer's day, would be a thing of the past if the Eugene Water & Electric Board opts to remove the Leaburg Dam.

LEABURG: In its analysis of options for the future of the Leaburg hydroelectric project, the Eugene Water & Electric Board noted that the Leaburg Dam was built to divert water to a canal for power generation. "If there's no need to divert the water, the dam still does serve other purposes," staffers said.

Among those benefits is the bridge on top of the dam that connects to the Leaburg Hatchery and homes across from Highway 126. The structure forms a barrier used to remove hatchery fish from traveling upstream to spawn and mix genetics with the wild stocks. At 70-plus years old, the dam is expensive to maintain, which complicates its the utility's cost-benefit analysis for keeping it without maintaining water rights for power generation.

That's only one of the concerns for proponents of removing the dam.

According to Bob Spencer, president of the McKenzie Watershed Protective, the utility's options for restoring power generation are "the most expensive."  He also criticizes EWEB for attempting to maintain their "Green Label" for renewable hydro energy by continuing to operate the Leaburg Dam and Walterville Canal.

The utility has noted that the cost of returning the project to service will "likely substantially exceed the expected returns from power generation." In a report to the utility's commissioners, the utility staff noted that "in order to recover the cost of investing to return to service for the remainder of the license period, market power prices would need to increase from the current forecast value of about $40 per MWh to at least $105 per MWh for low-cost repair scenarios and up to $180 per MWh for high-cost repair scenarios."

Spencer, who is also a river guide, is critical of both EWEB's Leaburg and the Walterville hydro projects. He says the utility is "diverting 75% of the river over a 17-mile distance causing water temperature changes, damaging fish habitat, and spawning beds.  Water remaining in the river below the diversions is super-heated in the Summer.  Salmon, Steelhead, and Native Trout cannot survive in water over 70 degrees."

He also gives low marks for impacts on recreation related to diverting water. "River navigation with the current minimum flow of 1,000 cfs in the dewatered portions of the canals is, at times, difficult to impossible.  A reliable and verifiable measurement of stream flow is required. It is our recommendation that a minimum of 1,900 cfs remain in the river in all dewatered sections of the river. "EWEB, though, has identified some positive aspects of returning the hydro project to service. The return to service option, staffers have noted, has favorable aspects from a local community/social impact "because it preserves a locally owned, low-carbon electric generation facility, and prolongs neighbors' ability to access water from the canal for irrigation."

Also on the recreational front, Spencer says the land exposed by lowering Leaburg Lake will open up public access to the largest area on the entire McKenzie River.  "Access to the McKenzie River is extremely limited by private land and rough terrain.  We envision connecting the Leaburg Fish Hatchery, EWEB Park, and the Discovery Center into one continuous park with a new covered bridge connecting all three. Fishing from the banks, rafting, kayaking, and paddleboarding will all benefit from additional access," he says.

Staff recommendations to either decommission or relicense the project are expected by the fourth quarter of 2022. That review is expected to include a detailed analysis of the social, environmental, and financial impacts of the decision, including an evaluation of relicensing by the Federal Energy Regulatory Commission.